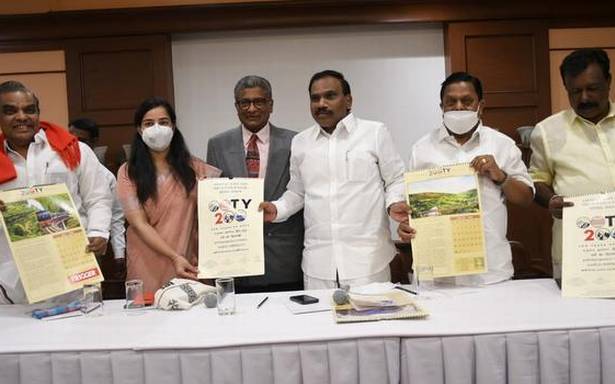 Steps will be taken to form a committee to look into bringing schemes that would benefit the Nilgiris and to decide on how best to celebrate the bicentennial of the colonial survey of the district, said Nilgiris MP A. Raja here recently.

Mr. Raja was among the special invitees to the event in which the Nilgiri Documentation Center (NDC) released a special calendar commemorating the colonial survey of the Nilgiris plateau by British administrator John Sullivan was released. He said that he would urge Chief Minister M.K. Stalin to form a committee comprising Ministers from various departments to look into the schemes that can be implemented in the district in 2022.

The MP also said that the district was unique in that there was no caste or religious discrimination like in other parts of the country. “Across the world, division of labour exists, but only in India, there is a division of labourers. For example, in other parts of the world, a carpenter is only a carpenter till he switches profession. Here, a carpenter and his sons will be carpenters forever. Even if a person passes a civil services exam and becomes a Collector, he will still be known by his caste,” said Mr. Raja.

Forest Minister K. Ramachandran said that consultations are being held for opening up more areas across the State for “sustainable, eco-tourism.” The government is also working towards increasing forest cover from 23% to 33%, he said.

Project Director of the Special Area Development Programme Monika Rana said that the mandate of the scheme had expanded with a focus towards preserving hill districts through sustainable models of development not only to preserve biodiversity, but also to ensure water security for surrounding districts in Tamil Nadu.

Venugopal Dharmalingam, honorary director of NDC, submitted a list of demands to the Minister and to Mr. Raja to elevate the Nilgiris as an international tourist destination. He also formally joined the DMK on Thursday.