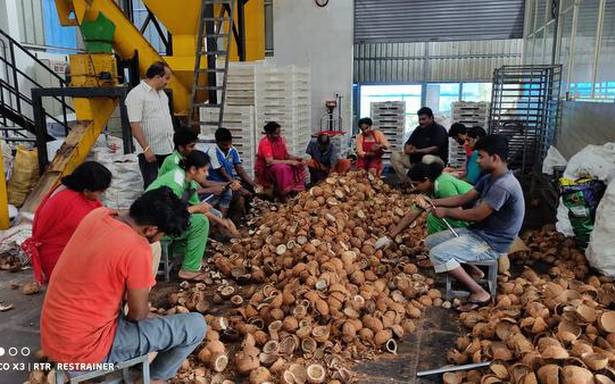 The spirit of enterprise has helped the 97-year-old Varappetty Service Cooperative Bank turn even the pandemic into an opportunity through a variety of initiatives that are often still alien to traditional service cooperative banks in the State.

The fame of the bank has now spread across the seas as consignments of coconut oil, processed tapioca and dehydrated banana chips were flagged off from the bank premises on Saturday by Cooperation Minister V.N. Vasavan, to be exported to New Zealand, Australia and the US.

The cooperative bank, which boasts of a membership of nearly 9,500, had ventured into providing coconut oil with a view to supplying a quality product in the face of widespread allegations of adulteration, says M.G. Ramakrishnan, president of the bank, who initially mooted the idea of having a oil extraction unit to ensure the availability of quality coconut oil.

The tapioca processing venture emerged during the COVID-19 challenge as an answer to the steep fall in the price of the produce, which pushed farmers into deep financial trouble. While tapioca price fell to about ₹8 a kilo, the Service Cooperative Bank procured the tuber from farmers at ₹15 a kg.

The first consignment of processed tapioca was shipped to the US, where it found wide acceptance. The success prompted the bank to launch exports to other two countries too, Mr. Ramakrishnan added. He said the bank secretary, P.R. Sunil, played a key role in the launch of ventures, which are now seeing fruition.

The bank, which has its own brand of coconut oil, started oil extraction in a small way in a mill that was closed. The facility was leased to start the processing of oil. Kerafed came to the aid of the cooperative bank initially. The State government too extended a helping hand. The Coconut Development Board provided ₹3 crore at an interest of 4% with 3% subsidy. With the money, a new mill with a capacity to process 4,000 kg of copra per day was established and inaugurated in February 2021.

The secret of success is the quality. No dry copra is procured but fresh coconuts are procured from Kozhikode and Malappuram districts and dried in electrical dryers. Similarly, tapioca is procured from joint liability groups, which are engaged in cultivation. Only the best quality produce is processed, he added.