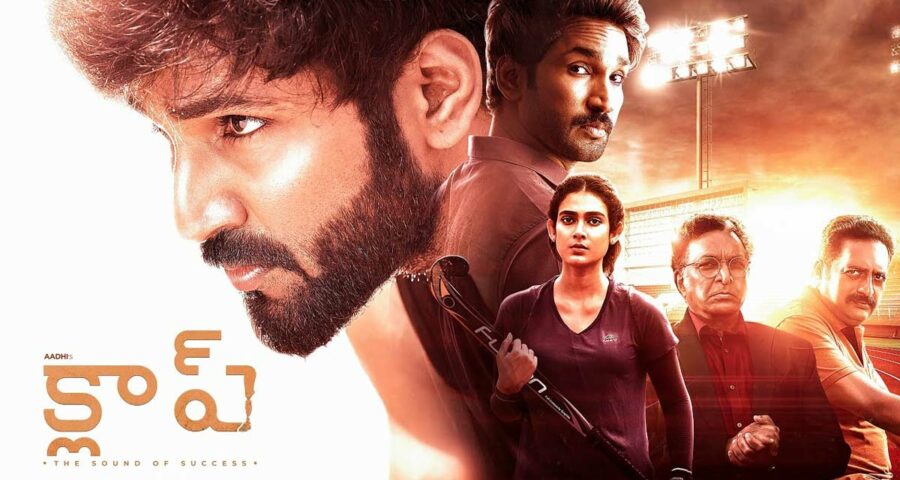 Sports drama “Clap” starring Adi Pinshetti as the protagonist receiving a series of offers as the villain. The film is directed by Prithvi Aditya with music by Ilayaraja. Tried to release in theaters.. but it was released OTT due to failure. Let’s see how is this sports film? which is streaming on Sony Live app..!!

Story: Vishnu (Adi Pinisetti) National Level Runner. He loses one leg along with his father due to an accident while on his way to international level. Even if he marries the girl he loves while doing a government job due to the death of his father, he will live lifeless without any happiness in life.

At such a juncture, Bhagyalakshmi (Krishna Kurup), a runner, realizes that she cannot go to the Nationals due to financial issues and decides to support her.
However.. Venkatram (Nazar), the head of sports, tries to beat Vishnu’s hopes and dreams at every stage. Faced with these obstacles.. How did Vishnu see his victory at the feet of Bhagyalakshmi? Is the “clap” storyline.

Cast: Adi Pinisetti plays the role of an incompetent man who loses a leg and lives without hope for life. He reflected nice emotions with his gestures. Played a very weighty role with Ease.
Akanksha role suppose to say a supporting role rather than a heroine character. She performed well in the range. Nazar, Brahmaji, Prakash Raj and Mime Gopi did justice to their respective roles. Krishna Kurup impressed as a runner.

Technical team performance: Listening to Ilayaraja’s background music after Many Days gave a good feel, his background music enlivened the emotional scenes. However.. the songs and voices were not impressive.
Camera work is minus. The frames needed for a sports drama do not appear anywhere in the film. Also.. Cinematographer Praveen did not select the appropriate lighting & tint for the scene.

CG work is very poor. No matter how low the budget .. it is very difficult to create emotion without a back drop. The big minus is that neither the production design team nor the art team understands this.

The Skill in the story written by director Praveen.. not in the execution. The concept that he wants to achieve success through his student that he could not achieve is not new to our audience. In that case a lot of care has to be taken in terms of screenplay. “Ashwini” which came up with almost the same concept in 1991 feels 10 times better than the movie “Clap”. Praveen, who was successful in getting good acting from good casting, failed miserably as a narrator.

Analysis: Emotion, the basic quality of a sports drama, fails miserably to impress a “clap” audience due to a lack of depth. We can only be seen once on Sony Live as for acting of Adi.