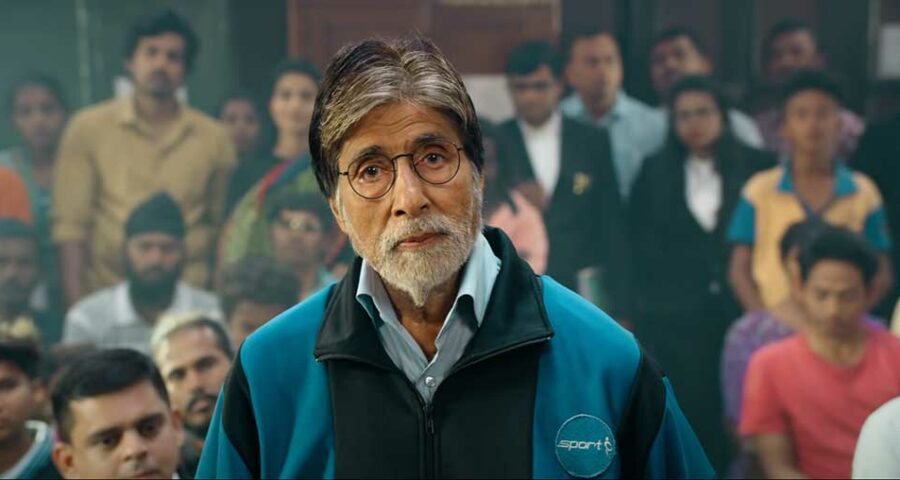 ‘In a scene where they were asked to have tears in their eyes, one of them came up to me and said, ‘How does one cry?’

“‘The greatest star-actor of Indian cinema’ is an unrecognised epithet, which I have never believed in nor pay service to,” Amitabh Bachchan tells Subhash K Jha.

Amitji, correct me if I am wrong. Jhund gives you a rare opportunity to play a real-life character. How different is it for you to play an actual character as compared with the fictional ones?

All projects are difficult, as are all characters when they are portrayed on screen. Vijay Barse was no different, particularly because he is a living character.

But in such cases you go along with the director’s take on it.

The real Vijay Barse is an inspiring figure. Did you get time to meet him? Mr Barse, by the way, is honoured and thrilled that the greatest star-actor of Indian cinema has played him.

Indeed, Vijay Barse is an inspiring figure, and the honour is entirely mine to have got an opportunity to portray him.

His realm of ‘the greatest star-actor of Indian cinema’ is an unrecognised epithet, which I have never believed in nor pay service to.

Directors who work with you for the first time — and there is no dearth of them — are in awe of you.
What was it like working with Jhund Director Nagraj Manjule who once told me he used to wear his shirt in the Deewaar style, so enamoured was he by your Young Angry Man persona?

These are embarrassing impressions for me.

I was in awe of his work before he came to me for the film. And they that work with me are not in awe of me .. it’s the other way round!

Speaking of Vijay, from the Vijay that you iconised in Zanjeer to the Vijay in Jhund, you remain the screen symbol of hope for the underdog. Do you agree?

It has and shall ever be an enchantment when an underdog succeeds. This is a fact of life! It responds to all.

I am certainly not the screen symbol of the hope that stories spell out; it is the writer and the director’s vision that brings it to the fore, not the actor.

The actor merely tries to do justice to the job at hand.

The slum boys (and a few girls) are absolute naturals on screen. Sir, what was your interaction like with them?

They were all handpicked for the job, by Nagarajji and briefed for their respective roles.

All of them are naturals, that came from the atmosphere you see in the film — the slums — and each of them has had the same kind of existence so succinctly portrayed.

They spoke their own language, and what they felt the situation needed.

Nothing was pre determined, and that was the beauty of their performance.

They lived their lives on screen as they lived in their real distraught circumstances.

Did any one of their stories particularly catch your attention?

Each story of theirs was an eye opener.

Nagarajji tried to bring it out in one scene, and that was riveting and so very emotional.

Emotion was a rarity for them, they knew very little of how to be emotional.

In a scene where they were asked to have tears in their eyes, one of them came up to me and said, ‘How does one cry?’

It was the most poignant moment for me.

Consider the question, Subhash, and you will find several wonder responses to it, if at all you can.

Either he has been through so much misery and pain that tears do not mean anything to him, or he has spent an entire early life with tears that he does not have any left.

When you see suffering and pain in the young being reflected by a smile, it is the most unbearable emotion!

True.Jhund had to wait its turn to make it into the theatres post the pandemic. Would you have preferred it to come sooner on the OTT platform?
In your opinion, how vital has the OTT platform become to cinema in the past two years?

This is best answered by the producers and the distributors and the industry in general.

When you come across a wall you cannot climb or cross, you find alternatives.

Aamir Khan was seen wiping tears while praising Jhund in a video. Your reaction to that, Sir.

Finally, Abhishek (Bachchan) is a diehard football fan. How enamoured are you to the game?

When your team plays, the world around us pauses!