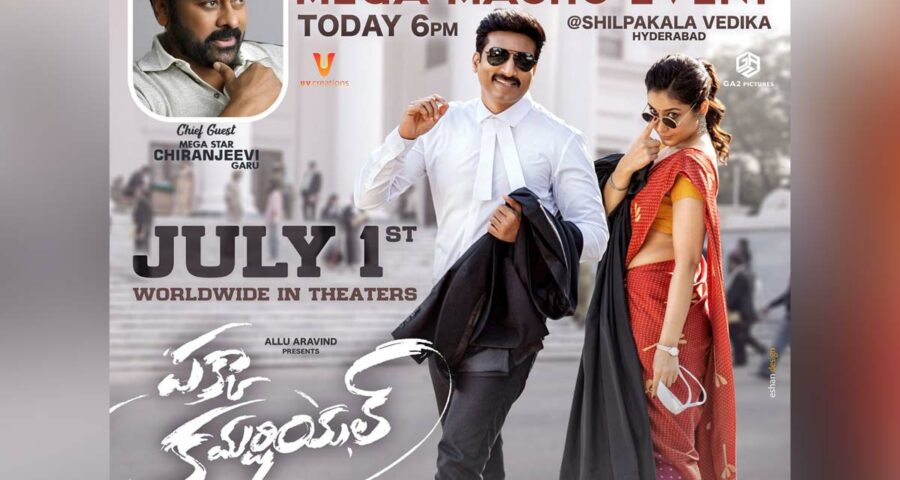 Gopichand is gearing up for his next release titled Pakka commercial, which is touted to be an out-and-out mass entertainer. The film which has Raashi Khanna as the leading lady is scheduled to be released on 1st July. The promotional campaign for Pakka Commercial is going on in full swing with Gopi Chand attending various events along with the rest of the cast.  The pre-release event for the film is going to take place today at Shilpakala Vedika,Hyderabad and megastar Chiranjeevi is going to attend the event as Chief Guest.

The sources say that Gopichand and director Maruthi themselves paid a visit to Megastar Chiranjeevi’ home to invite him to the pre-release event. So, the event is going to be a grand treat for the movie lovers with the Megastar on stage. With Chiranjeevi agreeing to be part of the event as chief guest, the promotional campaign for the Pakka Commercial has got a significant boost. Gopichand who has delivered back to back commercially flop movies, is pinning lot of hopes on Pakka Commercial.This time Chiranjeevi is trying to give lifeline to Gopichand

Pakka Commercial is bankrolled by UV Creations and GA2 Picture. Apart from the lead actors, the movie also has Satyaraj, Rao Ramesh and Anasuya Bharadwaj  in the important roles.

On the otherside, Chiranjeevi is working with Salman Khan in the upcoming action drama Godfather. He is also playing the lead role in Bhola Shankar.