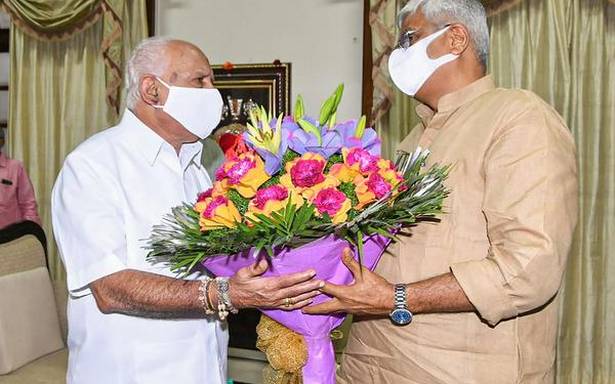 B.S. Yediyurappa made the announcement following a meeting with Union Jal Shakti Minister Gajendra Singh Shekhawat on July 13 in Bengaluru

A day after Tamil Nadu unanimously passed a resolution urging the Union government not to accord permission to Karnataka for the Mekedatu project in the Cauvery basin, Chief Minister B.S. Yediyurappa claimed that Union Jal Shakti Minister Gajendra Singh Shekhawat on July 13 assured the State of granting clearances for all pending irrigation projects, including at Mekedatu.

Chief Minister B.S. Yediyurappa and Mr. Shekhawat reviewed drinking water and irrigation projects in Karnataka. The Chief Minister told reporters that the Union Minister has promised to provide clearances to pending projects, including a balancing reservoir that Karnataka government proposes to construct at Mekedatu in the Cauvery basin.

On July 12, Tamil Nadu Chief Minister M.K. Stalin chaired an all-party meeting in Chennai where a resolution was passed saying no construction must be undertaken at Mekedatu without permission of the downstream States as per the Supreme Court’s judgment.

The Karnataka government insisted that the Centre had no reason to stall the proposal since drinking water was a major component of the project.

Prior to the meeting, KPCC president D.K. Shivakumar tweeted: “Today, as Union Minister of Jal Shakti Sri @GSSJodhpur will be conducting a meeting with CM Sri @BSY, we hope that the date of initiation of Mekedatu will be finalised. This project represents hope for Karnataka, and we expect the CM will leave no stone unturned to fulfill it”.

The Chief Minister said the State government urged the Jal Shakti Minister to issue Krishna Tribunal Award gazette notification and pending permissions from the Centre for Kalasa Banduri and Yettinahole projects in Karnataka.