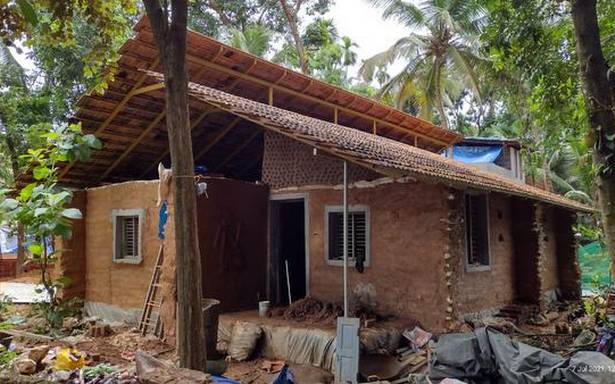 Just when people were figuring out how to spend their time during the COVID lockdown, it was a busy schedule for Aji Anand, his friends, and relatives, who live at Annur in Kannur district.

They were busy running around collecting construction waste, beer bottles, second-hand goods, and filling plastic bags with mud. They were not scrap dealers but were mostly a group of architects who came together to help Mr. Anand, who wanted to construct a low-cost budget house.

Instead of choosing the usual way, which would incur huge cost and require a large labour force, Mr. Anand, with a masters in manufacturing engineering, decided to take up the task to build a house himself.

Apparently, he and his wife Thanya K. Leela, a principal in a private institute, ended up with the idea of using materials that people generally discard.

Mr. Aji said though they had plans to construct a house, the huge cost was a constraint. That is when they decided on a house using mud and discarded materials for the construction on the advice of his cousin Akash Krishnaraj, a student at the School of Planning and Architecture in Bhopal.

A small message was placed on social media for help with necessary materials shared and it went so viral that they got numerous calls across the district. They hardly had any time to waste and within few months, they got everything they wanted to start the construction.

Instead of using a large number of laterite stones, they decided to use the mud dug at the construction site to tightly pack it in plastic bags. These bags were stacked one upon the other to create the walls of the house. Second-hand wooden window panes, doors, and about 2,500 beer bottles and pet bottles went in between the walls to light the house and provide ventilation. Similarly, second-hand tiles for roofs were used for a house.

Despite lockdown, they had no problem in construction, as all materials were available at the site and others were collected from houses and other premises. The major challenge was collecting beer bottles as the shops and bars were shut, he said.

Mr. Krishnaraj said the advantage of this house was that it was cost-effective, stable during earthquakes, and environmentally friendly. The 1,000-sq.ft house with two rooms, a hall, kitchen and a toilet, could be constructed at a cost of about ₹5 lakh.

The amount of cement and stone used for construction was quite less, which helped to keep the cost down. The plastering of the house was done with mud, which when nicely mixed with husk, clay and cement, strongly bounds the mud bags together and strengthens the walls during plastering. It could stand for over 60 years, he claimed.

With just a few labourers to help, the work was done with the support of friends and relatives, he added.

“People are struggling to construct the house due to unavailability of materials, escalating cost, and a huge shortage of manpower. However, such houses can be an answer to these questions,” Ms. Thanya said.

People were destroying environment for construction activities. But with small changes in their view, they could use available resources and exploit environment less, she observed.

With just some more works to be completed, they were expected to have a house-warming ceremony soon.