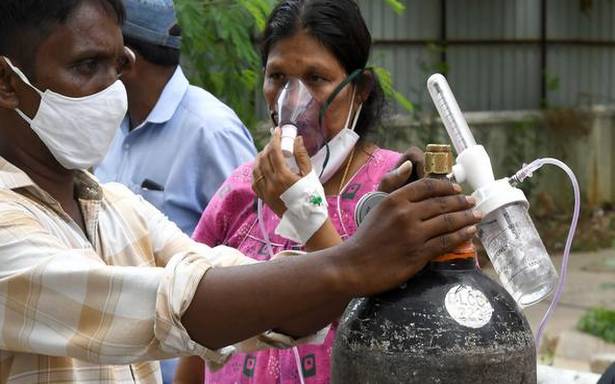 State reported death of some patients due to drop in oxygen pressure, as per preliminary inquiry, Minister of State for Health Bharati Pravin Pawar informs Rajya Sabha

The Union Health Ministry has for the first time admitted that some patients who were on ventilator support died while undergoing treatment for COVID-19 due to inadequate oxygen supply.

Without specifying the exact number, Minister of State Bharati Pravin Pawar said in the Rajya Sabha on Tuesday that in May, Andhra Pradesh had reported that some patients had died after a drop in oxygen pressure at a hospital, as per the preliminary inquiry.

The Ministry had maintained that “no State has so far specifically told the Ministry about deaths due to oxygen shortage’’ and that only one State noted suspected deaths due to inadequate oxygen supply.

The Minister said that as per Andhra Pradesh’s communication dated August 9, 2021, on May 10, 2021, at Sri Venkateswara Ramnarayan Ruia (SVRR) hospital, some patients who were on ventilator support died while undergoing treatment for COVID-19.

“As per the preliminary inquiry incident report, it appears that the interval between the levelling out of 10KL oxygen tank and the switching on of the backup manifold system of this hospital resulted in the drop in pressure in the oxygen lines. This led to insufficient oxygen being available for the patients mainly on ventilator support,’’ she noted.

‘Deaths due to lack of oxygen are not taken lightly’

Senior Health Ministry officials told The Hindu that each State had been specifically asked to report any death of COVID-19 and the reasons for the death.

“This isn’t a data that we take lightly. Data gathered is the guide for the Ministry [State and Central] to ensure that we are able to bridge any gaps and catch any trends early on. Several and immediate measures were brought in to ensure adequate oxygen and other medical supplies to the States during the COVID-19 waves,’’ she asserted.

Lav Agarwal, Joint Secretary, Health Ministry, said at a press conference on Tuesday said that only one State had till now reported “suspected” death due to oxygen shortage. He, however, did not name the State.

In the Rajya Sabha, in response to a question by Kanakamedala Ravindra Kumar on deaths due to inadequate oxygen supply in Andhra Pradesh, the Health Ministry noted that the Centre had been providing the required technical support and supported the States through logistic and financial support to further strengthen the existing health infrastructure to tackle the pandemic.

“On 28th May 2021, a total of 10,250 MTs of LMO was allocated to the States. This was done by enhancement of LMO production in steel plants as well as in other LMO plants. Restrictions were imposed on industrial use of oxygen. A dynamic and transparent framework for allocation of medical oxygen in consultation with all the stakeholders has been prepared,” it stated.