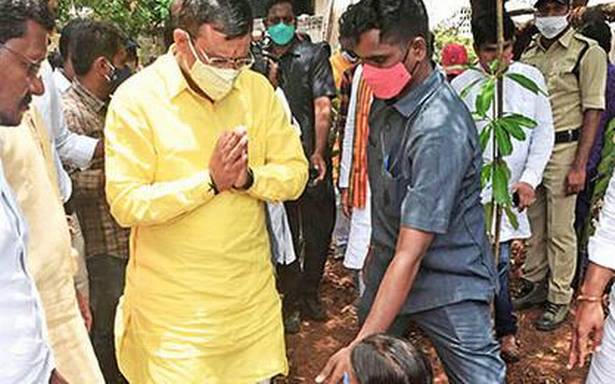 National Commission for Backward Classes (NCBC) vice-chairperson Lokesh Kumar Prajapati has asked the district administration to provide alternative house sites to those who lost their homes in the demolition drive at Ramachandraiah Nagar in the Khammam Municipal Corporation (KMC) limits in June this year, within a fortnight.

Mr Lokesh wanted the authorities to take urgent steps for proper rehabilitation of those rendered homeless by the demolition drive either at the site where their houses existed or some other suitable locality.

Earlier in the day, he interacted with members of the displaced families of Ramachandraiah Nagar during his field visit to the area.

The aggrieved shelterless poor people deplored that their houses constructed along the defunct irrigation canal were “demolished” by the authorities in an “arbitrary manner” during the COVID-19 pandemic.

They further alleged that their consistent requests for regularisation of their houses went unheeded while some influential persons managed to regularise their high-rise buildings constructed on the NSP lands using their clout in the past.

They wanted the intervention of the NCBC to ensure alternative house sites to them in the same locality.

Speaking at the review meeting later, Mr Lokesh questioned the rationale behind demolishing the huts/houses inhabited by poor people for nearly 20 years without providing alternative housing facilities.The officials reportedly told the NCBC vice-chairman that house site pattas were already sanctioned to around 25 displaced families and efforts were on to issue pattas to the remaining soon.