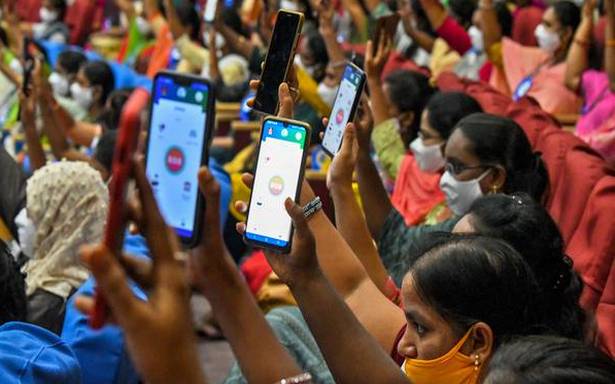 Director General of Police D. Gautam Sawang said that the State government is government is giving utmost priority to the safety and security of women.

Addressing a large number of Mahila Mithra members and Mahila police at a Disha App orientation programme in Andhra University Convention Centre, Beach Road, here on Saturday, Mr. Sawang said that after formation of the new government the Police Department had launched Cyber Mithra to receive complaints from women, later ‘Spandana’ was introduced which is a very effective tool for people to submit their petitions. Disha app and Disha police stations were brought into implementation, he added. The DGP said soon every district will have a Disha Court. “The police have been using technology to address safety and security of women. We have been facilitating and enabling access to women to reach us when they are in distress,” he said.

He asked the Mahila Mithra members to bridge the gap between women and the Police Department or the government. The DGP also asked them to keep interacting with the locals and learn about their issues to solve them. Mr. Sawang said that the State government’s decision to give the powers of police constable to the Grama Mahila Samrakshana Karyadarsis/Ward Mahila Samrakshana Karyadarsis will be a huge boost to tackle women issues.

DIG B. Rajakumari, who will be heading the Disha wing, said that the main objective of the Disha is to provide speedy justice and rehabilitation to the victims and also strengthen enforcement. She said that compared to the year 2019, crime against women have seen a 4% decline in 2020. “During the year 2020, a crime investigation would take at least 182 days, but in 2021, we are completing it in 42 days,” Ms. Rajakumari said. All sexual offences are charge-sheeted within 60 days, she said, adding that the State police have achieved a 90% success rate in sexual offence cases, when compared to the national average of around 35%.

She said that in the year 2021 so far, the State police have registered as many as 99 zero FIRs. “Above two lakh sexual offenders were identified and we had geo-tagged them and their movements are being monitored,” she added. After the Disha bill was passed in the Assembly and even before it could become an Act, conviction in 143 cases was announced. Among them, in three cases, life until death judgement was pronounced, she said.

DIG (Technical Services) G. Pala Raju said that while designing Disha app, we have ensured that latest features are incorporated in the App. He said that less time response, evidence-based policing, audio-video alert to reach control room and location identification through hand-gesture were taken into consideration to make the app a better one.

Visakhapatnam Police Commissioner Manish Kumar Sinha in his inaugural address spoke how steps taken by the Police Department for the women’s safety are changing their lives. He said that Mahila Mithras and Mahila police will play an important role in the coming days. ACP (Disha PS) Prem Kajal also spoke.