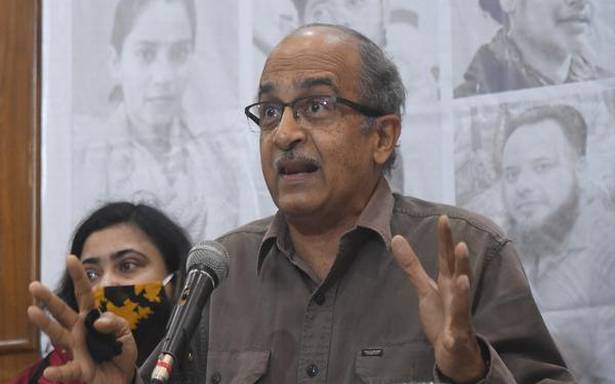 Senior lawyer Prashant Bhushan said on Saturday that freedom of speech is under “total siege” in the country.

Referring to the death of the 84-year-old Jesuit priest and rights activist Father Stan Swamy, who was jailed in connection with the Bhima Koregaon case, Mr. Bhushan said “anybody perceived to be a serious threat to the government or who speaks out against the government is charged and put in jail”.

Mr. Bhushan was delivering the Chinta Ravi Memorial Lecture 2021 on the ‘Threats to Constitution and Rule of Law’. He was speaking to a cross-section of prominent persons like senior journalist Sashi Kumar, writers N.S. Madhavan and Paul Zacharia, senior advocate R. Vaigai, advocate Kaleeswaram Raj, students and members of the civil society.

The state incarcerates citizens who exercise their right to freely express their dissent against the government under draconian statutes like the Unlawful Activities (Prevention) Act which loosely defines an “unlawful activity”, Mr. Bhushan said. “Once charged under this law, it is very difficult to get bail because the trial court has to be convinced that there is not even a prima facie case,” he explained.

Mr. Bhushan also referred to judiciary’s performance in the last five years in protecting the rights of ordinary people. He referred to the role of the apex court in politically sensitive cases like the Ayodhya dispute, Judge Loya death case, Rafale deal, Birla-Sahara case, the bifurcation of the State of Jammu and Kashmir and the Citizenship Amendment Act. He said that “people had begun to lose faith”.

“It is only in the last six months, with the significant shift in public opinion, that they (judiciary) have been able to retrieve and display judicial independence,” Mr. Bhushan said.

The senior lawyer said the media is going through the “worse kind of censorship”. The government has taken a carrot-and-stick approach with the media.

“Inducements by dangling a carrot, and if the carrot does not work, the stick is used through harassment by agencies like CBI, ED and the Income Tax,” he said.

Mr. Bhushan said certain sections of the media have become “instruments of propaganda, which is divisive, of the government”.

He said even institutions like the Election Commission of India have been impacted, as was seen in the non-compliance with Model Code of Conduct by the leaders of the ruling party.

“The ruling party leaders can conduct the grossest violations, engage in vituperative and communal speeches… no action is taken. This shows clear partisanship,” the senior lawyer said.

Mr. Bhushan began his address by saying that ‘democracy’ means much more than the right to vote every five years. “It means real participation by the people in governance. Transparency in government functioning and instrumentalities,” he noted.

Instead, he said, the party with the biggest coffers wins. “Election becomes a game played on money. Individuals who have access to funds, spend to make themselves visible and appealing while deserving candidates fall by the wayside… Visibility is a product of money, Being visible means spending money on advertisements, posters, large election rallies, etc… There is a huge difference in the money power between the BJP and other parties. Others do not stand a chance,” Mr. Bhushan said.