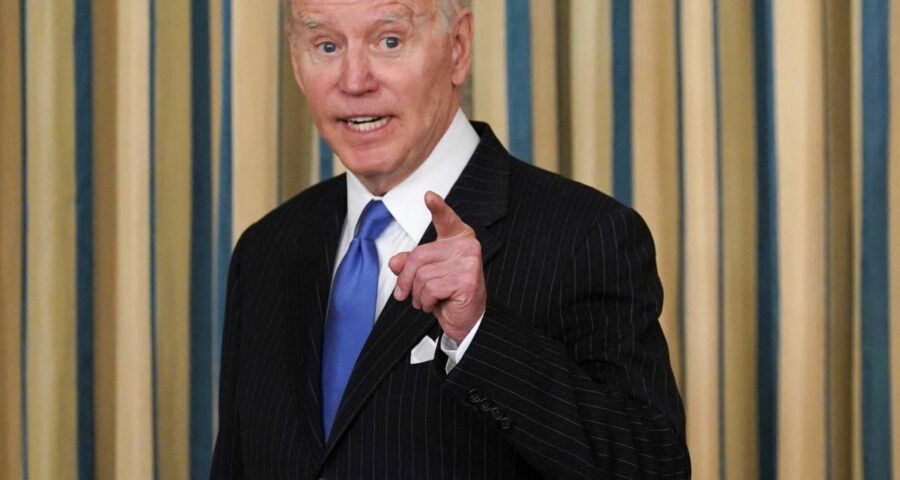 United States President Joe Biden has lauded the suspension of Russia, a veto-wielding permanent member of the United Nations Security Council, from the world organisation’s leading human rights body, saying this ‘meaningful step’ by the international community has further demonstrated how President Vladimir Putin’s war has made his country an ‘international pariah’.

The 193-member UN General Assembly on Thursday voted to adopt a draft resolution moved by the US to suspend Russia from the Geneva-based United Nations Human Rights Council (UNHRC) over allegations that Russian soldiers killed civilians while retreating from towns near the Ukrainian capital Kyiv.

The ‘Suspension of the rights of membership of the Russian Federation in the Human Rights Council’ resolution was adopted with 93 votes in favour, 24 against and 58 abstentions. India abstained from voting.

Reacting to Russia’s suspension from the UNHRC, President Biden said: “This is a meaningful step by the international community further demonstrating how Putin’s war has made Russia an international pariah.”

Biden said the US worked closely with its allies and partners around the world to drive this vote because Russia is committing gross and systemic violations of human rights.

“Russian forces are committing war crimes. Russia has no place on the Human Rights Council. After today’s historic vote, Russia will not be able to participate in the Council’s work or spread its disinformation there as the Council’s Commission of Inquiry investigates Russia’s violations and abuses of human rights in Ukraine,” he said.

No permanent member of the UN Security Council has ever had its membership revoked from any organ of the world body.

The UNHRC is a United Nations body whose mission is to promote and protect human rights around the world.

Observing that the images coming out of Bucha and other areas of Ukraine as Russian troops withdraw are horrifying, he said the signs of people being raped, tortured, executed — in some cases having their bodies desecrated — are an outrage to our common humanity.

“Russia’s lies are no match for the undeniable evidence of what is happening in Ukraine. That’s why nations in every region condemn Russia’s unprovoked and brutal aggression against Ukraine and support the brave people of Ukraine in their fight for freedom.

“The US will continue to work with responsible nations around the world to gather evidence to hold Russia accountable for the atrocities being committed, increase the pressure on Russia’s economy and isolate Russia on the international stage,” Biden said.

In a statement, US Secretary of State Antony Blinken, on Russia’s suspension from the UNHRC, said ‘a wrong has been righted’.

“Today a wrong has been righted. The world is sending another clear signal that Russia must immediately and unconditionally cease its war of aggression against Ukraine and honour the principles enshrined in the UN Charter,” Blinken said.

By suspending Russia from the UN Human Rights Council, countries around the world chose to hold Moscow to account today for gross and systematic violations of human rights in its premeditated, unprovoked and unjustified war of choice against Ukraine, he said.

“We have seen growing evidence of Russia’s brutal disregard for international law and human rights in Ukraine, most notably in the death and devastation it has caused in communities such as Bucha, Irpin and Mariupol.

“The atrocities the world has witnessed appear to be further evidence of war crimes, which serves as another indication that Russia has no place in a body whose primary purpose is to promote respect for human rights,” Blinken said.

US Ambassador to the United Nations Linda Thomas-Greenfield, in her remarks at the UN General Assembly Emergency Special Session to suspend Russia from the UN Human Rights Council, described this as an important and historic moment.

“Countries from around the globe have voted to suspend Russia from the UN Human Rights Council for its gross and systematic violations of human rights. We have collectively sent a strong message that the suffering of victims and survivors will not be ignored,” she said.

“After all, this is not only about accountability for Russia. It’s about standing with the people of Ukraine. And it’s about the credibility of the UN. Right now, the world is looking to us; they are asking if the United Nations is prepared to meet this moment.

“They are wondering if we are a platform for propaganda and a safe haven for human rights abusers — or if we are prepared to live up to our highest ideals, enshrined in the UN Charter,” she said.

The international community has taken a collective step in the right direction, Thomas-Greenfield added.

The Human Rights Council consists of 47 Member States, elected directly and individually by secret ballot by the majority of the members of the General Assembly.

The General Assembly, by a two-thirds majority of the members present and voting, ‘may suspend the rights of membership in the Council of a member of the Council that commits gross and systematic violations of human rights’.