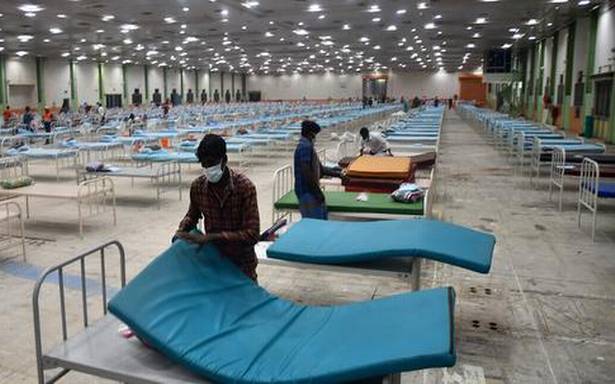 How is Tamil Nadu bracing for the third wave of the COVID-19 pandemic as cases are surging by the thousands every day? A battle-weary front-line force needs to handle yet another surge. The health managers, however, say the lessons learnt from the last two waves and the rapid expansion of health infrastructure will stand the State in good stead

In three weeks after reporting the first confirmed Omicron case, Tamil Nadu is in the grip of the highly transmissible and fast-spreading variant of SARS-CoV-2. Fresh COVID-19 cases have jumped seven times since the start of New Year, marking the beginning of yet another long-haul for the State’s health infrastructure and its workforce.

The State is now in the midst of an exponential rise in infections, as indeed is most of the world. The number of daily cases started increasing on December 29 when 739 persons tested positive and quickly surged to over 10,000 on January 8.

For health officials and public health experts, the rapid surge was on expected lines, and as the predictions pointed out — inevitable. Compare this: It took 58 days in the first wave for the daily count in the State to peak from 1,000 cases to nearly 7,000. In the second wave, it took 26 days for the cases to jump from 1,000 to nearly 7,000. It took another 38 days for the cases to peak at 36,000. In contrast, it has just taken 7 days for the daily cases to jump from 1,000 to 7,000. As the graph accompanying this article shows, the emerging curve of the third wave appears to rise more vertically — rather like a wall than a wave.

In no time, Chennai has turned into a hotspot, driving the surge. Chengalpattu, Coimbatore, Tiruvallur, Tiruppur, Erode, Kancheepuram, Salem, Thoothukudi and Vellore are the other districts of concern because of the high caseload. Lessons learnt from the second wave, which wreaked havoc on the State as it ran out of beds and oxygen, has put the Health Department on guard.

Now, the State’s twin aims are to prevent the spread of the disease and strengthen clinical management, Health Secretary J. Radhakrishnan said. “From the experience in the past week and what is observed globally, it is clear that the present surge is fuelled by the Omicron variant, while Tamil Nadu has residual cases from the Delta variant. In the last three months, whole genome sequencing revealed that 99.9% of the samples were of the Delta variant. With the situation changing rapidly, it was 65% Omicron and 35% Delta earlier this week. According to experts, the dominance of Omicron is likely to be swift and it is likely to swamp all fresh positive cases,” he explained.

It was on December 15 that the State reported its first Omicron case. A Chennai resident, who had travelled from Nigeria through Doha, tested positive for the new variant. A total of 185 persons — of whom 68 had no links with international travellers — tested positive for Omicron in the State.

At the Government Corona Hospital, where the first patient was admitted on December 11, the initial panic among those who tested positive for the new variant — international travellers and their contacts — quickly faded as the symptoms subsided in a couple of days. There were no recurrent symptoms, no requirement for oxygen support or higher drugs, said its director K. Narayanasamy. The hospital has treated 40 confirmed Omicron cases, and has so far seen nearly 200 persons with suspected symptoms.

As the cases surged, the State quickly updated its triage and treatment protocol to guide its response to the new variant. The updated protocol provided for home isolation of the fully vaccinated asymptomatic persons and other categories and took the vaccination status as one of the deciding factors for hospitalisation. From January 6, the government brought in new restrictions — weekend curbs at places of worship, night curfew and a total lockdown on Sunday, among others.

After the second wave tested the health infrastructure, the Health Department ramped up bed and medical oxygen capacities. As of now, the State has nearly 1.20 lakh beds, with 50,000 beds being added at COVID-19 Care Centres, while the present oxygen storage capacity was 1,730 metric tonnes.

“Considering the inevitable surge, instead of the number of cases, we are conscious of the number of people who actually need hospitalisation. Asymptomatic patients who are fully vaccinated should not be hospitalised but monitored clinically through home isolation and at COVID-19 Care Centres. We have asked every district to set up war rooms, encourage the setting up of screening centres and follow the triaging protocol so that oxygen-supported beds and intensive care unit beds at government and private hospitals are free for those who need treatment,” Dr. Radhakrishnan said.

“Our health system is well prepared to handle the crisis — not only the health infrastructure, including oxygen availability, but also trained human resources, clear-cut protocols on triage, clinical management, monitoring of home isolation and discharge. Sufficient drugs and consumables are stocked to manage the situation,” T.S. Selvavinayagam, Director of Public Health and Preventive Medicine, added. “Based on the experiences across the globe, we anticipate a steep rise in cases in Tamil Nadu, but our efforts are made in such a way that we will slow down the speed of the rise and flatten the curve so that our health system is not overwhelmed and there is no excess mortality or morbidity,” he pointed out.

As a way ahead, sequencing of samples would continue to identify the circulating variants and the emergence of new ones from all potential clusters. It was a continuous process of monitoring, Dr. Selvavinayagam said. But he quickly added: “But whatever be the variant, we need to follow the basic COVID-19 appropriate behaviour and get vaccinated so that even if there is infection you are protected from severe illness and death.”

The pattern observed in Tamil Nadu, especially in Chennai, was similar to that of cities such as Mumbai and Delhi, said Prabhdeep Kaur, deputy director, Indian Council of Medical Research-National Institute of Epidemiology. “So, this is not totally unexpected. The rise is consistent with how Omicron behaves globally, in other countries and thickly populated big cities in India. The faster transmission suggests that the Delta variant will be pushed behind by Omicron.”

Based on his experience of treating several COVID-19 patients during the last two waves, a senior government doctor in Chennai said the strain seemed to be milder, with the number of patients needing oxygen support being fewer. Fever with chills and sore throat are the commonly seen symptoms lasting for a maximum of three days. “We should be able to cope with this wave better than last time. But the strain on healthcare due to excess fever cases may be high. Wave after wave, there seems to be no respite, and we are exhausted. Most of the triaging could be done at zonal healthcare facilities so that tertiary care centres need not be overburdened. We can have fever camps, either streetwise or wardwise. If fever persists beyond three days, they can be tested and admitted to a tertiary care centre,” he said. He added a word of caution: “We need not panic seeing the number of positive cases. It is going to be very high. The number of patients at the intensive care units and fatalities could be a better indicator of the wave rather than the total number of cases.”

RGGGH Dean E. Theranirajan said that from December 17 to January 6, the hospital saw 231 persons in whose samples S-gene dropout was identified. Of them, 22 were asymptomatic — no fever, cold or cough. They were contacts of patients. A total of 38 had mild flu-like illness, while 171 persons had fever for two days with cold and cough. A total of 17 persons required oxygen of less than five litres.

The doctors went on to check the vaccination status of patients. They found that 194 persons were vaccinated — 176 fully vaccinated and 18 with a single dose. The remaining 37 were not vaccinated. “None of the persons with S-gene dropout is in the intensive care unit. The Delta variant is still in circulation. We have 13 patients in the intensive care unit — all of them with the Delta variant. Of them, only two are vaccinated and have co-morbidities. A majority of patients are in room air. The situation is not alarming, but we need to stay cautious. When the number rises exponentially, our health infrastructure could get strained,” he said.

But the two major areas of concern are poor compliance with the mask mandate and the low second-dose vaccination coverage. “Even after two years, the message on masking has not reached. There is poor mask compliance, especially in indoor settings… Wherever people come together in a close setting, the spread is fast. Persons with co-morbidities should wear good quality masks — a three-layer cloth mask or surgical mask,” Dr. Kaur said.

Dr. Radhakrishnan is of a similar view. “Despite clear indications of Omicron cases increasing, there is a general tendency to treat the surge lightly. People need to understand that if we allow the number to spiral vertically, the corresponding increase in absolute number of cases, especially those with co-morbidities, might lead to an increased number of hospitalisation. It is a struggle as the awareness among people is not accompanied by willingness to change to safe behaviour. People are taking masking and adherence to the standard operating procedures casually. We need massive public support,” he said.

Which other areas require attention? Triaging of patients is one. She added that triaging would identify who needs hospitalisation. “We need to preserve beds for those who require oxygen support and stand the risk of a severe disease.” Avoid all gatherings and get tested if symptomatic. Do not rush for CT scans or expensive tests or hospitalisation. If fully vaccinated, monitor oxygen saturation and get a teleconsultation, she said. “We should not rush to declare lockdowns because of rapid transmission. We need to assess our health system’s capacity. The situation needs to be closely monitored, and panic is definitely not the solution,” she said.