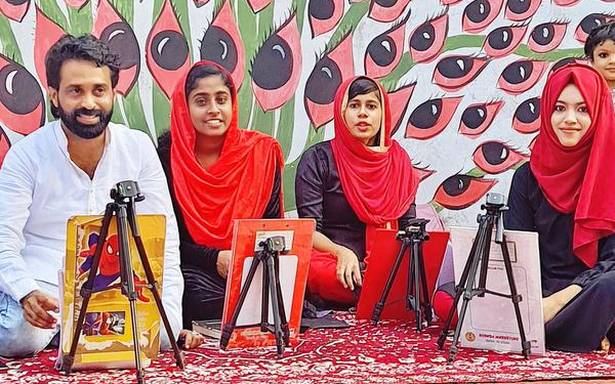 Singers take audience through struggles of the past

Thunchath Ezhuthachan Malayalam University at Tirur witnessed a unique presentation of Mappila Ishal history on the inaugural day of a three-day seminar on the centenary of Malabar Rebellion.

When young Mapilapattu lyricist and Ishal aficionado Faisal Kanmanam and team presented the Ishal history through Mappilapattu, it provided a different experience to the crowds on Thursday evening. Mr. Faisal took the listeners through the deepest treasures of Mappilapattu and also provided a memorable musical evening.

Singers Arshita Tirur, Shahana Shibin, and Dimsha Theyyampattil lent him a perfect chorus. Faisal and team started their programme with Mohiyiuddin Mala, which is widely considered to be the first Mappilapattu in the traditional rhythm. They guided the audience through the Mappila struggles that had taken place in the 18th and 19th centuries. Although the Ishals were not unheard, the history behind them was new to many people.

Faisal touched upon several poets and social reformers, including Kambalath Govindan Nair, Edassery Govindan Nair, and S.K. Pottakkad in his “singing and narration”.