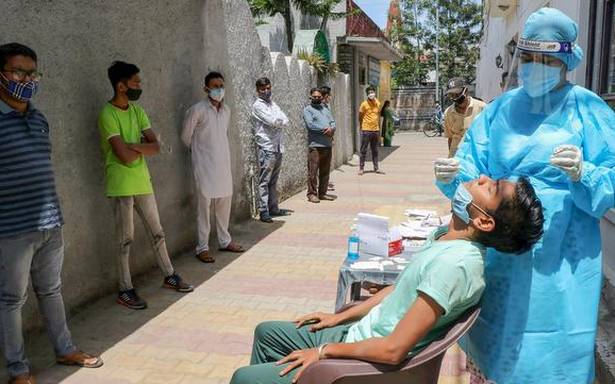 The J&K government on Saturday said the novel coronavirus variant B.1.617 was responsible for the recent surge in cases in the Jammu division of the Union Territory (UT), as 63 more people died due to the infection in the last 24 hours.

“As per the recent sequencing data analysis of the positive patients, B.1.617 variant is responsible for the surge in the Jammu division. The U.K. variant was found in more than 60% samples in March, 2021. In April the percentage of the U.K. variant dropped to 47% and B.1.617 increased from 5.8% to 38%,” said Principal and Dean Government Medical College, Jammu, Dr. Shashi Sudhan Sharma.

These two variants, officials said, were found circulating in the UT have UK and Western Coastal states as the sites, where the original virus mutated and their observed change in frequency in UT is through epidemiological investigation.

In a positive trend, Srinagar has of late been consistently recording less than 1,000 cases per day. “Only 404 cases were reported on Saturday,” officials said. Jammu recorded 621 new cases.