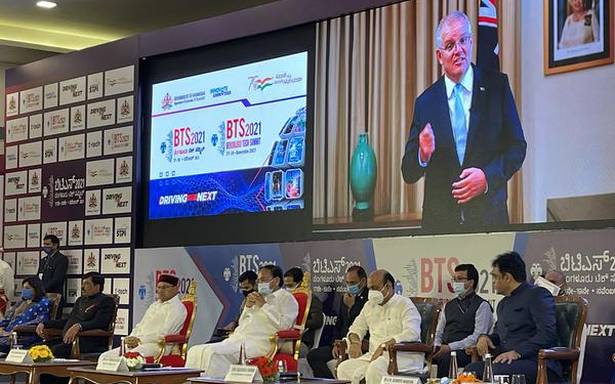 Australian Prime Minister Scott Morrison on Wednesday said an Australian consulate would be set up in Bengaluru and also announced the establishment of Australia-India Centre of Excellence for Critical and Emerging Technology Policy, while addressing the inaugural session of the flagship Bengaluru Tech Summit – 2021 (BTS – 2021).

“I’m pleased to let you know that Australia is also seeking to establish a new consulate general in Bengaluru. Bengaluru is the world’s fastest growing technology hub, of course we want to be part of it,” said Mr. Morrison.

Australia’s new mission in Bengaluru, which is home to a third of startup unicorns, would expand the country’s diplomatic presence in India to five posts in total.

“Australia will deepen our ties to India’s innovators, to your technologists and entrepreneurs — as well as India’s governments at all levels,” he noted.

Elaborating on the new centre of excellence, the Prime Minister said it would bring together Australian and Indian technologists, policy practitioners, academics, researchers, and thought leaders.

“The centre will also promote investment opportunities and innovation between Australia and India in technology, and amplify our policy influence globally,” Mr. Morrison said in his virtual address to BTS – 2021.

Israeli Prime Minister Naftali Bennett, who also participated virtually, said Israeli and Indian creativity, imagination, and tenacity had the power to do amazing things. “So to all of you at this conference I say keep doing great things. Keep dreaming and keep making those dreams a new reality. The future belongs to those who innovate. And the future is right here sitting in this room,” said Mr. Bennett.

He recalled that he ran a company in the past which later merged with an Indian firm and he had a wonderful experience of a different culture. Mr. Bennett expressed his desire to visit India soon.