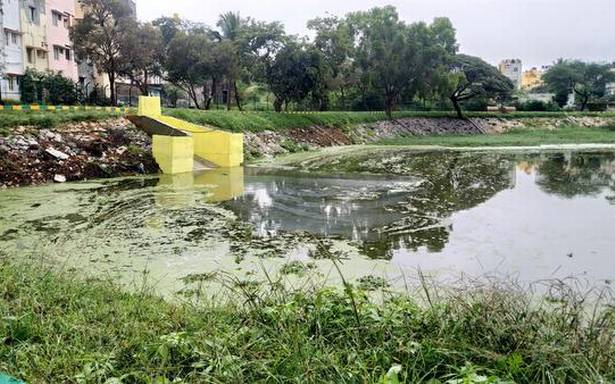 They say the diversion channel was blocked with sandbags

Residents who live near Doddakallasandra Lake, which had been taken up for rejuvenation, are up in arms over sewage entering the lake’s wetland instead of flowing into the rajakaluve after the diversion channel was reportedly blocked with sandbags. While the problem was resolved on Wednedsay, they are worried that it will occur again.

“On Sunday (November 14), we saw that one of the two inlets linked to the sewage diversion channel was discharging water into the wetlands,” said a resident Raghavendra B. Pachhapur.

Doddakallasandra Lake is linked with two rajakaluve via inlets. While one directly connects to the major storm water drain, the other inlet is linked through a sewage diversion channel. This is the inlet that is discharging sewage water into the wetland, said residents.

Despite the unusually heavy rains in the past few months, there was very little discharge from the inlet during the monsoon. When they inspected the other end of the inlet, they saw that untreated sewage water, instead of flowing into the sewage diversion channel and into the rajakaluve, was entering the wetland.

Another resident, Soundarajan, who is part of the Doddakallasandra Lake Protection Committee, checked a connecting manhole and discovered that sandbags had been placed to stop sewage water so that it could be diverted to the wetland. “The authorities have spent about ₹5 crore on the lake rejuvenation project. The fact that sewage water is once again entering the lake, defeats the very purpose of the exercise,” he said.

After the residents’ welfare association escalated the matter, sewage inflow into the lake had stopped by Wednesday evening “There needs to be a more permanent solution. The RWA has submitted a list of pending works to the authorities,” said Mr. Soundarajan, alleging that at least 30% of the lake is sewage water.

Bruhat Bengaluru Mahanagara Palike officials from the lakes department, however, argued that a separate sewage diversion drain had been constructed to ensure sewage doesn’t enter the lake or the wetland. “During the rains, there is a lot of waste that flows in and is dumped, which creates blockages. We regularly clear these blockages to ensure free flow of water,” the official claimed.