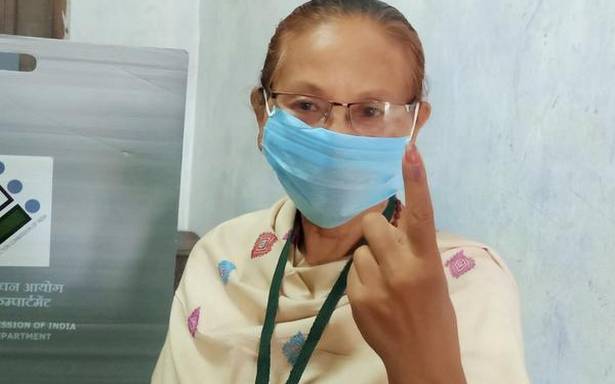 Regional party outdoes Mahajot ally Congress and the All India United Democratic Front, who packed their candidates off to Rajasthan

What the All India United Democratic Front (AIUDF) can do, ally Bodoland People’s Front (BPF) can do better.

Two days after the AIUDF and Congress packed at least 20 of their candidates off to a luxury hotel in Congress-ruled Rajasthan, the BPF sent 10 candidates overseas, apparently amid fears of horse-trading by the Bharatiya Janata Party (BJP) prior to the declaration of the Assembly election results on May 2.

The Congress, AIUDF and BPF are the main constituents of the 10-party Mahajot and grand alliance that contested the three-phase State polls.

An ally of the BJP during the 2016 polls, the BPF had fielded 12 candidates this time. But Rangja Khungur Basumatary, its candidate for the Tamulpur seat, joined the BJP six days ahead of the third and final phase of polling on April 6.

Of the remaining 11, all except Minister Pramila Rani Brahma exited Assam on Saturday. There is speculation that they are in adjoining Bhutan, whose nearest point is a few hours drive from western Assam’s Kokrajhar town, where all the candidates were asked to assembly by BJP chief Hagrama Mohilary.

“They [the candidates] have left Assam. I have also heard they are out of India, but I cannot say where they have gone as I have not been able to get in touch with them,” Ms. Brahma said.

She also said more than a dozen elected members of the Bodoland Territorial Council (BTC) could have left Assam. “They may have gone on vacation or are away because of the possibility of horse-trading at the council level,” she added.

The BPF had emerged as the single largest party in the BTC election in December 2020 but the BJP formed the government there in alliance with the United People’s Party Liberal.

The State unit of Congress has expressed the need to exercise caution because of the possibility of the BJP trying to lure Mahajot candidates away in the event of a tight finish when the Assembly election results are declared on May 2.

“We must be cautious in order to beat the BJP’s anti-democracy moves. From the past, we know the BJP can go to any length for a Congress-free India. They prevented us from forming governments in Goa, Manipur and Sikkim,” Congress MLA Devabrata Saikia said.