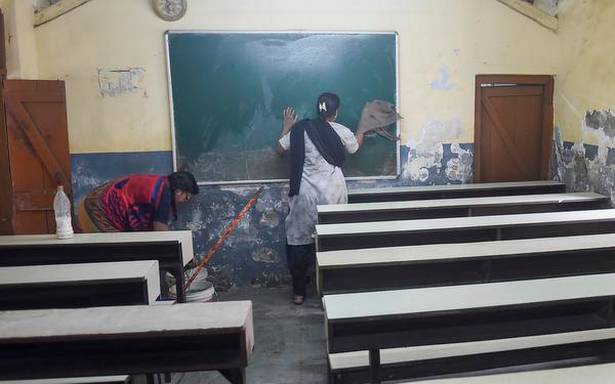 Until now, schools were conducting physical classes only in those areas which were reporting relatively fewer COVID-19 cases

Schools across Maharashtra resumed physical sessions for classes 5 to 12 on October 4 after being shut for over 18 months in the wake of the COVID-19 pandemic.

Until now, schools were conducting physical classes only in those areas which were reporting relatively fewer COVID-19 cases.

Last month, Maharashtra’s School Education Minister Varsha Gaikwad had announced that physical classes will resume in schools across the State and the government also issued standard operating procedures (SOPs) for it.

On October 4 morning, the minister in a tweet said, "Wishing all parents and students the very best as schools reopen across the state today. We hope you enjoy your first day back in a safe atmosphere." According to the Maharashtra government, physical sessions have started for classes 5 to 12 in rural areas and for classes 8 to 12 in urban areas of the State.

The Maharashtra education department conducted a meeting on October 3 to take stock of the situation before resuming physical classes in schools.

"For a smooth transition to physical classes, effective coordination with the health department, local administration will have to be maintained. We are committed to providing a conducive atmosphere to students, many among whom will be returning to class after a year and a half," Ms. Gaikwad had tweeted after the meeting.

As per SOPs issued by the State government for the reopening of schools, it is not mandatory for students to attend physical classes. If they want to attend, they will have to submit consent letters from their parents.

Ms. Gaikwad last month said that as per a survey conducted by the school education department, more than 70% parents favoured reopening of schools.

In Maharashtra, physical classes in schools were stopped in March 2020, after the outbreak of the COVID-19 pandemic.

The State government in July this year allowed schools to restart physical classes in the rural areas where COVID-19 prevalence was negligible. The decision mainly benefited the State’s Vidarbha region, but schools in major cities like Mumbai and Pune remained closed.