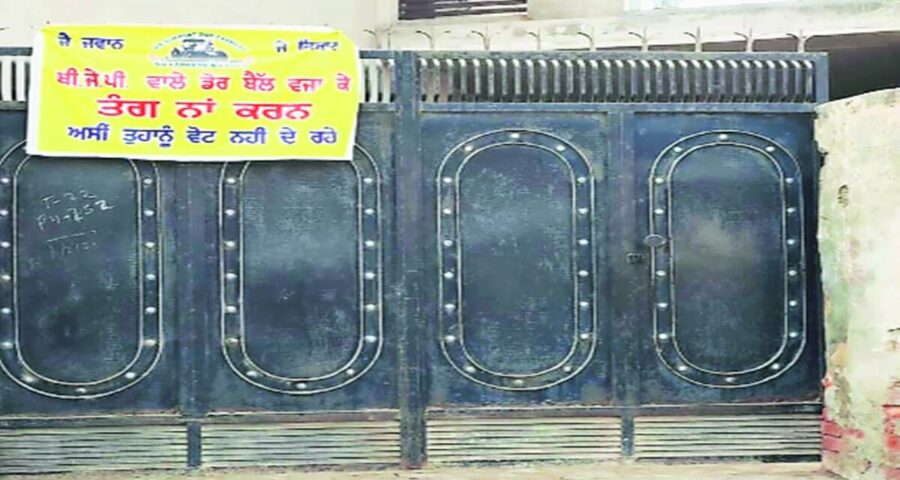 Even BJP state president Ashwani Sharma had to face protests on February 8 when he came to Abohar to campaign for the 50 party candidates contesting the local body polls. 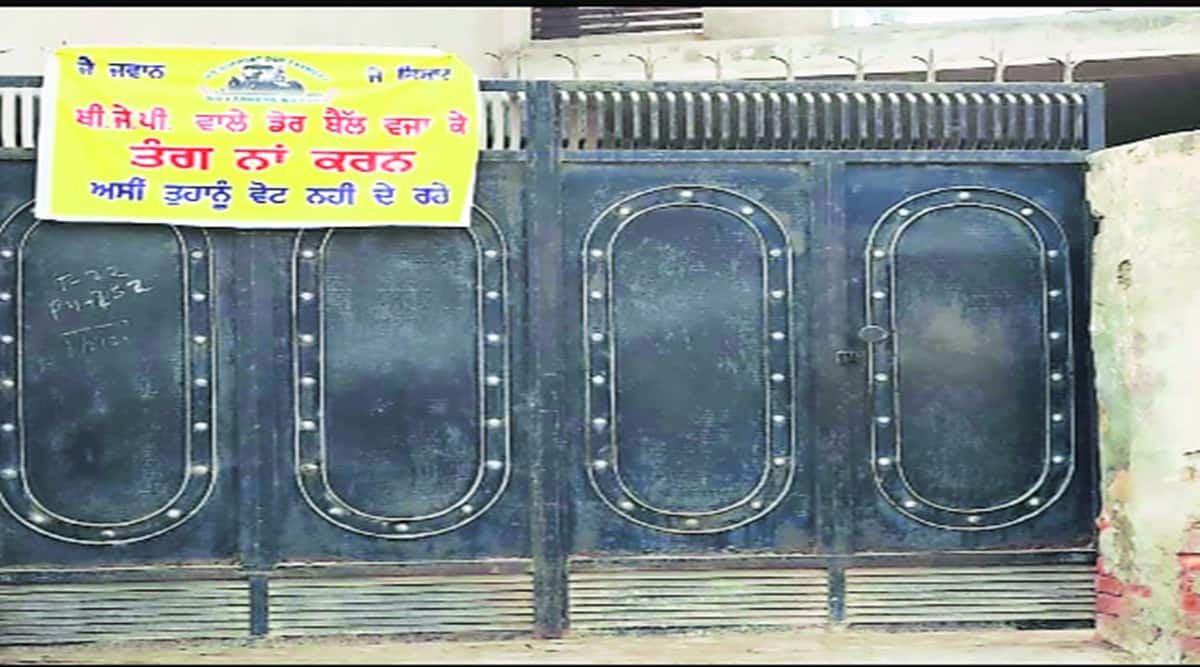 The Abohar constituency is represented by a BJP leader in the Punjab Vidhan Sabha. However, it seems, the anger against BJP over the farm laws is most visible there with posters coming up outside seeral houses informing the saffron party leaders not to ring the doorbell.

“BJP wale doorbell vaja ke tang na karan. Assi tunhanu vote nahi de rahe ( BJP people should not trouble us by ringing the door bell. We are not voting for you),” read the posters outside several houses in Ward number 41, Anand Nagri area, and Jammu Basti.

Even BJP state president Ashwani Sharma had to face protests on February 8 when he came to Abohar to campaign for the 50 party candidates contesting the local body polls.

In Faridkot, after district BJP president Vijay Chhabra joined the SAD, the saffron party got divided into several factions. On the last day of campaign for the local body polls, BJP’s party candidate from ward number 14 in Kotakpura Assembly constituency said, “Two independent candidates of BJP are contesting against me and party office bearers are taking no notice of it”.

In Faridkot, people had asked BJP candidates well in advance to withdraw their papers as they will not be voting for them.

Interestingly, in Bathinda, district BJP president Vinod Binta is contesting as an independent from ward number 2 of Bhucho Municipal council. On Thursday, farmer unions took out a protest march in ward number 2 against Binta.

Several videos of BJP candidates facing protests have been uploaded on social media from different parts of the state. Though BJP fielded nearly 1154 candidates on party symbol, but after scrutiny and withdrawal of papers, the 1003 were left in fray. On Thursday, BJP district president Yadwinder Shunty’s wife Manju Sharma, who is contesting polls for Barnala Nagar council, faced protests from area residents and had to leave the campaign in between.

Narain Dutt, social activist and from Inqlabi Manch said, “In Shaheed Bhagat Singh Nagar of ward number 27, people came out on rooftops and in the streets to lodge their protest when Shunty and his wife came to seek votes. BJP has fielded Manju Sharma from this ward. However, when people raised slogans against the Modi government, they went back. It is ironic that candidates are facing protests because of their PM”.

In Barnala, out of 31 wards, BJP is contesting only on two on party symbol. Two more candidates who were to contest on party symbols faced protests soon after filing papers and after that they never came out to campaign.

BJP chief Sharma faced protests everywhere he went due to which he cancelled several meetings in Doaba region. In Abohar, he could conduct a meeting only after reached and left the venue from the back door while in Ferozepur he had to change the venue. In Bathinda, he held a closed door meeting near AIIMS while farmers kept protesting near a hotel.

In Bathinda, people even tore away the voter slips given by a candidate while in yet another ward, the candidate and his supporters were told by area residents to leave immediately. Sharma, however, said, “These protests are by only a handful of people. Congress is not even allowing us to reach out to voters. Why did they declare the elections, when they did not want us to campaign?”

Reacting to the allegations, PPCC president Sunil Jakhar said, “If BJP is not ready to listen to the farmers, they should at least listen to their leaders on how they are facing protests. It is the anger of the general public”.