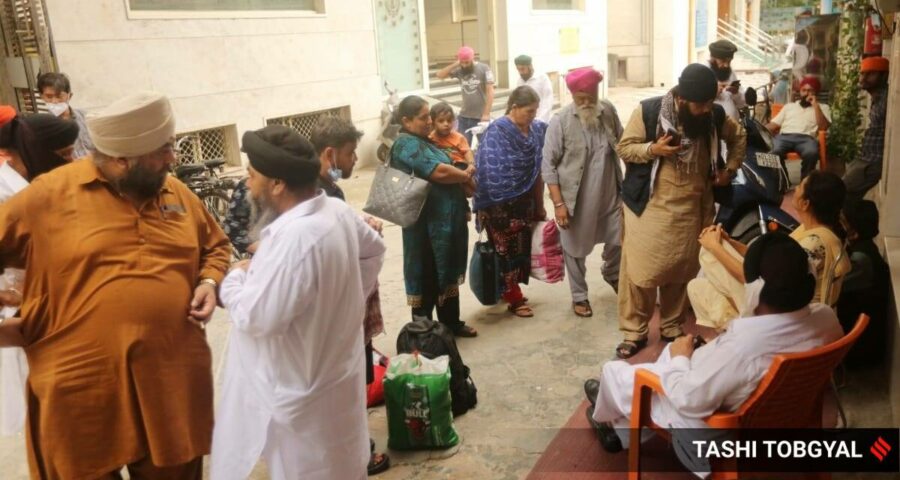 44 Indian nationals completed 14-day quarantine on Wednesday, they now hope the govt comes through for them. A few elderly people sit inside Guru Arjan Dev Ji Gurdwara premises in New Mahavir Nagar as a small child plays nearby. Some volunteers are busy arranging snacks for the evening.

The people here are part of a group of 44 Indian nationals who were airlifted from Afghanistan and discharged from ITBP’s Chhawla Camp Wednesday after completing a 14-day quarantine.

They had reached the facility on August 24.

Among them was Kailash Kaur, 60, who had lost her younger son in a bomb blast around a year ago, when he was opening his shop for business. “My elder son and daughter-in-law are still in Kabul. I hope they are evacuated. I have lost everything but don’t want to lose my family; that is all I am left with now,” she said, in tears.

Her younger daughter-in-law is in Ludhiana with her family. Kaur also plans to go to Ludhiana but is unsure what she would do there. “I lost my husband who was in the Afghan forces in 1992. Things were coming back to normal when I lost my son,” she said.

“I request the government to make arrangements for our livelihood from here,” she said.

Kanv Bhalla, who is coordinating the rescue and rehabilitation efforts on behalf of the Mandeep Singh Sobti foundation and Indian agencies, said five families comprising around 35 members would be supported.

They would get a house on rent, financial support, and health insurance from the foundation, he said.

Gurdeep Singh, 22, said he had to leave everything behind in Kabul as his family had been living there for generations. They were in the medicine business.

“There are people who came to work in Kabul; at least they have their roots attached and go back to their relatives. Where will we go?” he said.

“We request the government to grant us a place to live, some business opportunities, as they had helped refugees after the Partition,” he said.

Singh said he and a bus full of people landed in India after three failed attempts. “For three days, a bus used to take us from a gurdwara in Kabul to the airport but we were denied entry. We saw gunshots being continuously fired, we would be on the edge of our seats, unsure if we would make it back alive,” he said.

It was only when the government of India intervened that they were able to get out.

During the evacuation, three ‘swaroops’ of the Shri Guru Granth Sahib were brought to India and have been kept in the Gurdwara at Swaroop Nagar.

Darshan Singh, who too was in the medicine business, said, “They didn’t give us any time to sell anything or bring money along. A year ago, I had asked my son not to come to Kabul. I will now go to Ludhiana, where he is.”

“But we do not have any land or house there; only rented accommodation. My son has been unemployed for a year. I hope to get some help, else I would only be a burden on him,” he said.