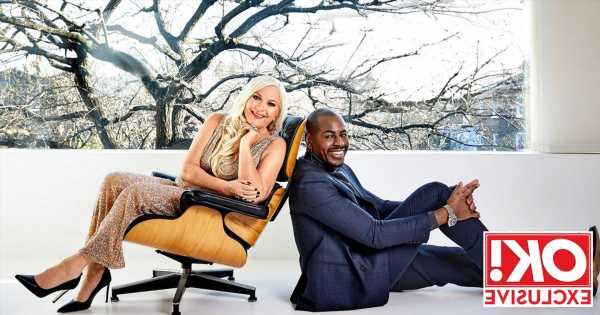 Ben Ofoedu popped the question to his presenter partner Vanessa Feltz back in 2006, a year after meeting – the couple first locked eyes over the chocolate fountain at the OK! Christmas party, no less.

Fast-forward 15 years after getting engaged, the pair have yet to tie the knot, which Vanessa told us is because her divorce from her doctor ex-husband Michael Kurer 21 years ago made her "wary of getting married again."

Opening up to OK! at our photoshoot celebrating her 60th birthday, when asked if she would like to get married in the future, the This Morning star said: "We think it’s OK the way it is.

"I do think “never say never”, but I certainly haven’t made any plans for a wedding and I think we’re quite happy this way."

Explaining her reluctance, the 'glam-ma' further explained she was so "shaken up by her divorce" all those years ago.

Vanessa discovered the father of her daughters, Allegra and Saskia, was cheating on her when it was reported in a newspaper.

Speaking about her subsequent divorce, the Radio 2 broadcaster told us: "It absolutely derailed me to the most terrific extent.

"I was so shocked and broken-hearted and rocked to my absolute core. It makes you wary of getting married again. The marriage seemed to be so disposable – it could just be chucked down the toilet in 10 seconds flat, even though I didn’t want it to be and I didn’t realise there was any trouble with it or problems.

"So it made me feel a bit damaged and reluctant to ever do it again."

Her fiancé and Boyz on Block star Ben Ofoedu seems to have the same view when it comes to getting hitched.

"I’m not saying we’ll be engaged for eternity, but whatever we’re doing seems to be working.

"There’s a beauty to being engaged – you’re not quite married so you still make an effort."

However, he then teased the couple have spoken about "many different plans," and said, "If we did do it [get married], it would take people by surprise."

We won't throw out our hats just yet then!