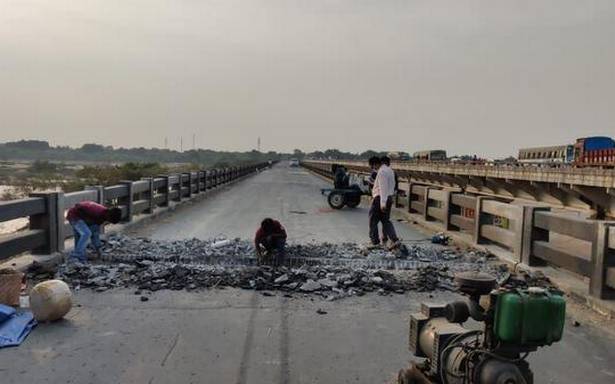 On Monday, thousands of motorists had a harrowing time due to an hours-long traffic jam

Monday evening turned out to be a harrowing experience for thousands of travelers from the southern districts, travelling to Chennai.

After Madurantakam, traffic slowed down and there was chaos well into the night due to the repair work being taken up by the National Highways Authority of India on the bridge over Palar river, leading to Chengalpattu town.

While police personnel were posted well ahead on the road made into a single lane to caution motorists at Pukkadurai junction which itself took 30 minutes to traverse, they could get to notify only a few motorists about the jam ahead. With plenty of heavy vehicles like buses and thousand of cars and two-wheelers jostling for space, it became a nightmare of sorts as it took two to three hours for travelers to cross a stretch that normally takes less than 10 minutes.

"The police told me that there was heavy traffic. By then, I had spent close to one hour on the car only to move inch by inch a few hundred metres. I took a U-turn and went back to take Thirukazhukundram Road to reach my residence in Padur," said Ajay, a software professional who was travelling with his child.

Those travelling on buses were the worst affected as it took a long time for them to get past chaos. Some of them even got down to have coffee at roadside eateries before taking the bus that moved only by a few feet every few minutes.

"The authorities should have alerted the people through the media about the work and the delay in travel time that could have helped people take different routes to reach their destination in and around Chennai," said Gomathy, a resident of Ambattur.

"Expansion joint work on Palar bridge on the Tindivanam – Chennai section is going on, and traffic was being diverted for this purpose. The traffic diversion work began on Monday and it will go on for 60 days, said Adarsh Pachera, ASP, Chengalpattu.

On Monday, very heavy vehicles were diverted at Pukkadurai junction but buses and trucks were let in till Mayur junction. “As there was a heavy traffic jam, we are diverting all the heavy vehicles including at Pukkadurai junction from today [Tuesday]”, he said. Only two-wheelers and light motor vehicles are being allowed to take the diversion at Mayur junction, he said, and said he expected traffic movement to be better hereafter.

The traffic congestion could be higher in the evening peak hours, he said adding that the police would closely monitor the situation and take the required measures to ease traffic.