Tom Holland is dishing on working with the actors who returned to reprise their characters in Spider-Man: No Way Home!

Among those who returned include villains Jamie Foxx as Electro, Alfred Molina as Doc Ock and Willem Dafoe as Green Goblin.

There were also some other characters who returned for the movie.

WARNING: THE REST OF THIS POST CONTAINS SPIDER-MAN: NO WAY HOME SPOILERS!! 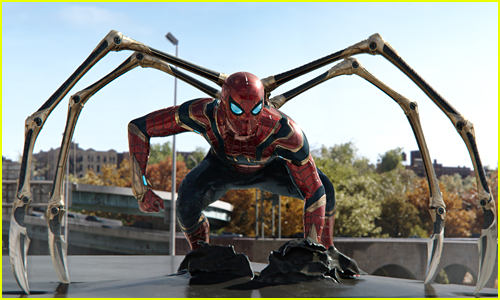 “We had so much fun working with Charlie,” Tom said, via Marvel. “It’s really interesting doing a scene between two Super Heroes that has no real Super Hero stuff in it. Apart from the bit when he catches the brick. It was awesome.”

On working with Tobey, the first Spider-Man, Tom said, “Tobey was so funny… Man, he was so funny. He was really excited to be back. You could tell it really meant a lot to him. Him putting the suit on again. Us getting back together. It was awesome.”

“Andrew Garfield, the legend himself. He’s such a lovely guy,” he shared. “I think this film was his way of making peace with Spider-Man. It was such a privilege to work with him. I know that it meant a lot to him.”

Zendaya even chimed in and shared what it was like watching all of them.

“It was so beautiful. [Tobey, Andrew, and Tom] care so deeply about the characters, and what their characters— what their journey had been as Spider-Man,” she said. “It was so beautiful to see all of you guys connect on that and be able to talk to each other about such a special experience that very few people have been able to don the suit. It was great to see how much you guys all really cared and had each other’s back. It was really sweet.”

If you missed it, Spider-Man: No Way Home has become one of the top ten movies of ALL TIME at the domestic box office!