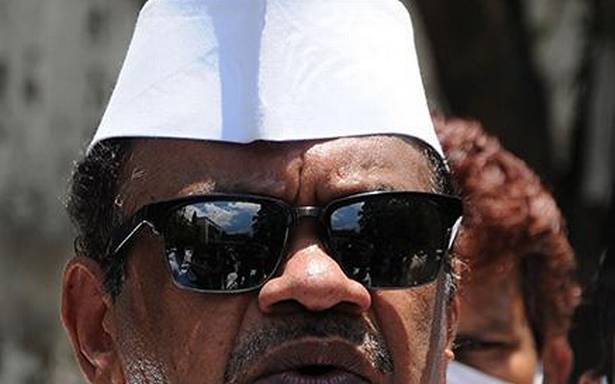 Bhongir MP and senior Congress leader Komatireddy Venkat Reddy on Thursday stepped into Gandhi Bhavan for the first time after his Parliament colleague A. Revanth Reddy was appointed Pradesh Congress Committee (PCC) chief, breaking his vow not to enter it again.

After competing for the top post and disappointed at being denied, Mr. Venkata Reddy announced that he would stay away from Gandhi Bhavan but work in his constituency to strengthen the party.

In fact, there were rumours of he leaving the party that was vehemently denied by him stating that he would remain a Congressman forever.

On his first entry almost after six months, Mr. Venkata Reddy said any differences among the leaders will be settled within the party fora while dismissing his earlier vow. His visit comes in the wake of senior leader and Sangareddy legislator T. Jayaprakash Reddy stepping up his attack on Mr. Revanth Reddy, accusing him of taking unilateral decisions and ignoring the party seniors.

Has the ‘cold war’ with Mr. Revanth Reddy ended was the question on everyone’s lips with the sudden and surprise visit? The discussion at Gandhi Bhavan among the party leaders was whether Mr. Venkata Reddy buried his differences with the new chief after announcing that he would never enter Gandhi Bhavan when Revanth Reddy was made the new PCC Chief.

A senior leader recalled that he was seen along with Mr. Revanth Reddy at a joint press confernce in New Delhi recently questioning the ‘friendly fight’ of the TRS and the BJP over the paddy crisis. “He is a seasoned leader and understands the dynamics of politics well,” a leader close to him revealed how his anger has diminished over some months.

Followers of Mr. Revanth Reddy heave a sigh of relief saying his visit has poured water on the heat generated by Mr. Jayaprakash Reddy, who has been constantly targeting Mr. Revanth Reddy in recent times. “This is a good sign when we need to send a strong message that party leaders would work cohesively to take on the TRS and the BJP that have been grabbing the headlines relegating the Congress to the background.”

Mr. Venkata Reddy is the senior most among the present legislators and parliamentarians in the Telangana Congress – being a four-time MLA and also serving as a Minister in the combined Andhra Pradesh.

He was elected as a Parliament member in 2019 polls. He takes the credit for forcing the Congress high command to understand the gravity of the Telangana sentiment after resigning from the Cabinet in 2011 and sitting on a fast for nine days.