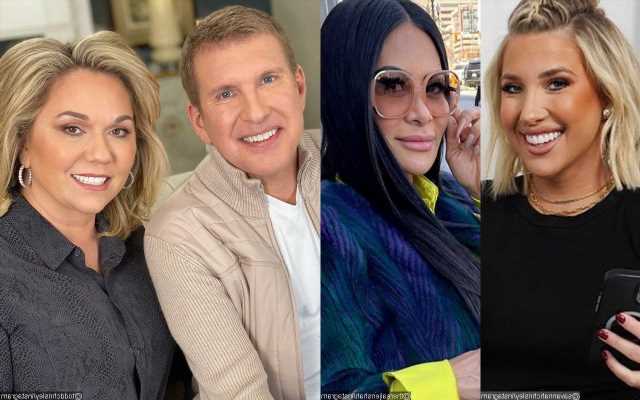 In a new episode of her podcast, Savannah questions why the ‘Real Housewives of Salt Lake City’ star gets a shorter jail time than her parents for their white-collar crimes.

AceShowbiz –Savannah Chrisley has one question regarding her parents’ jail sentences. In a new episode of her “Unlocked” podcast, she questioned why fellow reality TV star Jen Shah got a shorter jail time than her parents, Todd Chrisley and Julie Chrisley, for their white-collar crimes.

“Put the cases side by side, and it makes no sense – it just doesn’t,” Savannah said in the Tuesday, January 17 episode. She later emphasized that Jen had “victims” in her nationwide telemarketing scheme, which primarily targeted the elderly.

The “Chrisley Knows Best” star noted, “There were hundreds of victims who were elderly, and people that provided statements that lost their homes, threatened to end their lives. There were so many different things, and she got six and a half years. Make that make sense!”

Todd was sentenced to 12 years in prison, with Julie being given 7-year prison sentence after they were found guilty of conspiracy to commit bank fraud and conspiracy to defraud the United States and tax evasion. Meanwhile, “The Real Housewives of Salt Lake City” star was sentenced to 78 months in federal prison and five years of supervised release, which will include approved mental health treatment, after pleading guilty to the telemarketing scheme case.

“You have someone who has not admitted to guilt and who will stand firm in that,” Savannah went on to say on her podcast, referring to Todd and Julie. “We’re standing by our truth that it is not guilty, [and] there are no victims.”

Julie also agreed, noting that unlike Jen, her and Todd’s case had “no victim statements.” The reality TV star said in the pre-recorded episode, “None of it adds up, and to me, there’s more to it. I have committed myself to figuring out what that is and for us to get to the other side of this so that we can help other people who are going through things like this.”

The episode was released hours before Todd and Julie reported to separate prisons on the same day. Before starting his prison sentence, Todd shared a video of Karen Peck & New River performing “Four Days Late” inside a church. He wrote in the caption, “HE is always on time,” adding the hashtag, “#FightTheGoodFight.” His family members, including Savannah and Kyle Chrisley, showed support to the Chrisley patriarch in supportive comments.