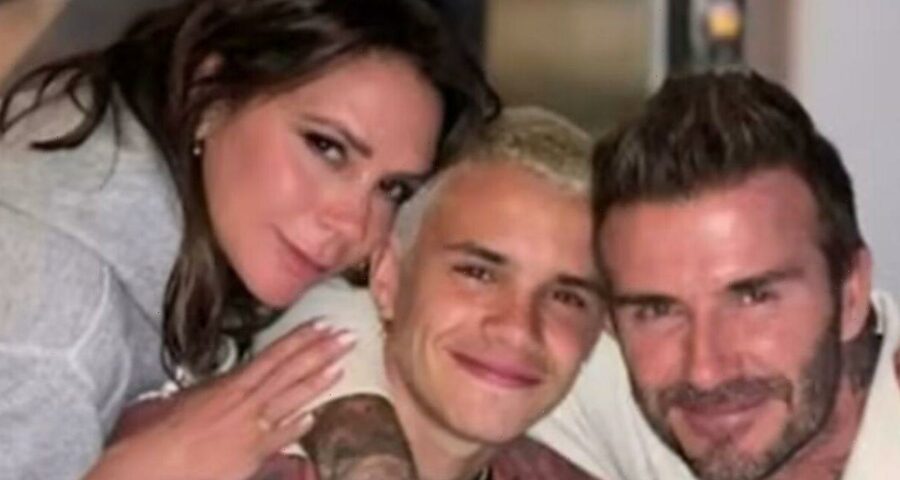 Romeo Beckham and sister Harper work on their football skills

Romeo Beckham called time on his relationship with model and influencer Mia Regan last June, but now, eagle-eyed fans are wondering whether they might have reconciled. Mia recently announced a collaboration on her Instagram page with Romeo’s fashion mogul mum Victoria Beckham, and he proudly reposted it – just months after removing all traces of his ex from his page.

The post showed Victoria had launched a “six piece capsule collection by Mia Regan”, which includes “vintage inspired denim” pieces, and has already been featured in fashion bible Vogue.

Instantly, comments like “I think you’re still in love with her,” began to appear on his page from fans fishing for news of a reconciliation.

Despite rumours of a rift between Victoria and Romeo’s older brother Brooklyn’s wife Nicola Peltz, Victoria was always said to have bonded with Romeo’s girlfriend, and they’ve even been in the front row at London Fashion Week together..

READ NOW: Lewis Hamilton confesses ‘I feel so alone’ after reflecting on split

They shared the same passion for fashion, whereas Nicola was more interested in building her acting career at the time.

Plus while Nicola claimed Victoria’s atelier had been “unable” to make the type of wedding gown she’d wanted, leaving her to walk down the aisle in Valentino instead, Mia actively promoted Victoria’s products online.

However, sadly, things came to a halt between the young couple in June – and a crestfallen Mia was pictured in the audience at Wimbledon looking blue without her beau by her side.

Prior to the split, there had been rumours that the pair were heading for marriage, and had been waiting it out so as not to take the spotlight away from Brooklyn and his bride.

Mia has been praised by fans for her down to earth and easygoing nature.

She was born in the small town of Chippenham in Wiltshire, not far from the heart of the Cotswolds, and her father earns a living as a fundraising manager for an ambulance service.

A source close to the Mirror had previously talked about the prospect of the pair tying the knot.

“It was clear the couple want a long-term future together and have already spoken about being soulmates,” the source explained at the time.

“Marrying quickly and young seems to be in the Beckham tradition.

“They are besotted with each other and are definitely in it for life. They also talked about how much they want a big family and can’t wait to get started.”

The source continued: “Mia is a very different woman to Nicola Peltz and has always stated she would like to marry in Britain, making for a far more casual and low-key wedding to the one Nicola and Brooklyn had.”

If they do rekindle their romance, it seems likely that collaborations with Victoria could be on the cards again in the future.

Mia previously used her platform as an influencer to promote Victoria’s clothing line, while her artwork was featured in a 2020 drop by the ex-Spice Girl.

Photos have even emerged on Instagram of the model replicating Victoria’s famous high kick pose while clad in fitness-wear from her Reebok range, with besotted Romeo standing alongside her.

At the time, she captioned the photo “Work in progress”.