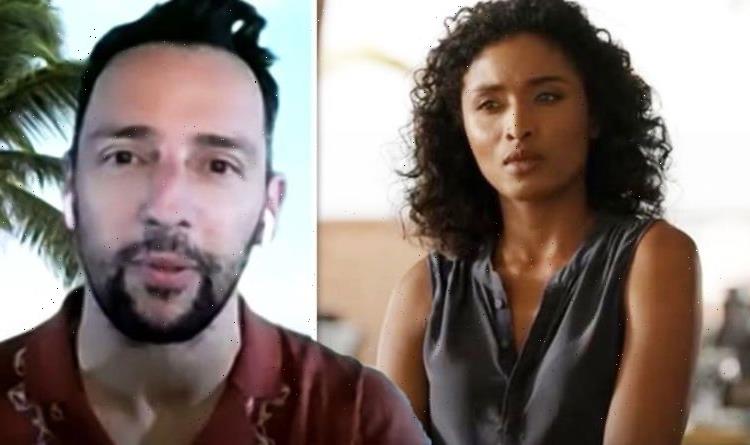 Death in Paradise actor Ralf Little, 41, took to Instagram to reveal a grim discovery in a short video. The British actor, who plays lead detective Neville Parker in the series, claimed to have stepped away from his breakfast for 10 minutes, before returning and finding his food covered in a swarm of ants. However, one of Ralph’s co-star’s immediately commented on the clip, light-heartedly calling out the star for “lying” about the incident, before relaying her version of events.

Taking to Instagram, the star shared the short clip of his grim discovery with his 79,900 followers.

He penned: “Left my breakfast for 10 minutes to go to make up… this is what I came back to,” followed by a green-faced emoji.

In the video, Ralf panned a wooden table with his belongings on before zooming in to his breakfast, which had been ravaged by a swarm of ants.

While his empty mug of coffee remained untouched, the remains of a half-eaten baguette was covered in ants as they crawled over the star’s breakfast.

However, one of Ralf’s cast members called him out on the claim that he had left his breakfast unattended for 10 minutes, suggesting that it may have been a bit longer.

Sara Martins, 43, who plays DS Camille Bordey in the BBC series, attributed the star’s ruined breakfast to his lengthy stay in the make-up chair.

Commenting on the stomach-churning clip, she quipped: “Don’t lie…you spend 55mn to do your make-up !!!

Camille left Sainte Marie to work undercover in Paris in season four of the BBC series.

Six years after leaving the popular detective drama the French actress returned to the show in season 10 for two episodes.

Her reprisal of character Camille comes as Sara is not yet confirmed for season 11, which started filming early last month.

Fans of the star also commented on the video, many with sick-looking face emojis.

One wrote: “Any longer and they’d have been carrying that bad boy across the decking!!”

Another added: “Where’s the lizard when you need him?” while a third penned: “The Caribbean you don’t see in the adverts,” along with a laughing emoji.

Last month the Death in Paradise star shared a behind-the-scenes clip from Guadeloupe on his Instagram as filming for season 11 started.

Filming from outside, the actor revealed that the Caribbean island was experiencing a torrential downpour.

“The stuff you don’t see in the final edit!” he captioned the rainy clip.

“Home from home,” he continued, adding an umbrella and laughing emoji followed by the hashtags: “#DeathInParadise #deathinparadiseedits.”

“A little taste of paradise for ya,”(sic) Ralf said to the camera before spinning it around to show the weather.

“This is the bit you don’t see on the show,” he added in between humming the theme tune.