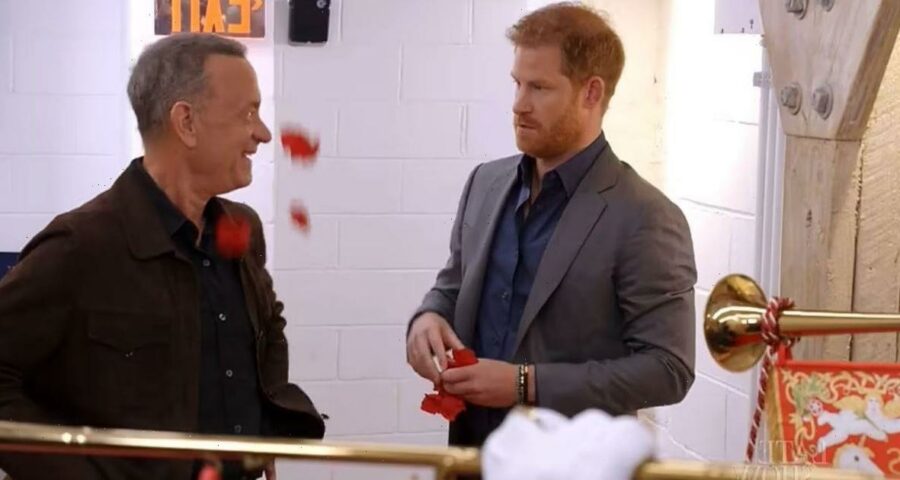 Prince Harry poked fun at the Monarchy in his latest US TV interview and was joined by none other than Hollywood’s Tom Hanks.

The Duke of Sussex’s book, Spare, was released on Tuesday and detailed moments like Harry shopping at TK Maxx, his 2009 romance with Caroline Flack and how Prince William recoiled when Meghan Markle attempted to hug him.

The Prince, who also made waves with his Harry & Meghan Netflix show last year, is currently doing media rounds in America.

While appearing on CBS’ Tonight Show with Stephen Colbert, the 38 year old Royal arrived at the studio to two trumpet heralds wearing regal uniforms that seemed to be replicas of the official outfits worn by the State Trumpeters of the Household Cavalry.

“Woah, woah, woah, stop, stop. Stephen, not needed, but thank you, I appreciate it,” he joked to Stephen, who responded, “What are you talking about? This isn't for you!"

“Get out of the way, he's coming!” the show's host added, at which point Tom Hanks walked round the corner and said, “I'm back! Where's my fanfare?”

Harry then proceeded to throw rose petals at the Forrest Gump actor, with some fans taking to Twitter to delight over the comedy skit.

“Tom Hanks and Prince Harry. they r hilarious what a duo,” joked one person, as another said, “#PrinceHarry throwing rose petals for @tomhanks I'm [dead].”

But not everyone saw the comedy in the sketch, as one scathed: “This is excruciatingly cringeworthy.”

Harry’s memoir has divided its audience, with some loving the candour and others taking issue with what they perceive to be the Duke throwing his family under the bus.

In one instance, the youngest son of Princess Diana recalled attending an A-list party in the US where he took magic mushrooms and thought the moon was speaking to him.

Harry wrote: "I stared directly at the moon. It was speaking to me. Like the bin and the toilet.

"What was it saying? That the year ahead would be good" he then replied asking "good how?"

Other parts of the autobiography detailed how Prince Harry used psychedelics to help cope with the loss of his mother, and in another part, how he rolled a joint at Tyler Perry’s house while his wife and kid were sleeping.

During his TV interview with ITV’s Tom Bradby, Prince Harry also said it was “important to acknowledge” drug use after Tom pointed out: “There’s a fair amount of drugs (in the book). Marijuana, magic mushrooms, cocaine. I mean, that’s going to surprise people.”