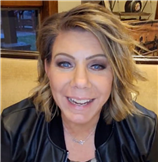 Meri Brown clearly knows what she is doing at this point.

The only questions fans should really have is this:

Does the Sister Wives star continue to post mysterious memes and messages as a way to simply acknowledge her marriage is in shambles? As a sign that she may  soon walk away from it? As a form of venting her frustration and/or anger with Kody Brown?

One can easiily be confused by Meri’s intentions.

But there shouldn’t be any confusion behind Meri’s target in these posts.

She’s very obviously talking about Kody and what amounts to their sham of a relationship.

Although… it is even a sham when both sides agree they’re just friends who haven’t had sex in 10 years?

On Sunday, Meri took to her Instagram Story and shared the following quote:

Today they will call you ‘lucky,’ assuming you’ve had an easy, privileged life.

But you know you’re blessed because you know every bit of Hell and high water He’s brought you through.

For over a year now, Brown has frequently made allusions of this kind.

Of late, though, she’s brough God more and more into the picture, seeming turning to religion in the wake of her marial struggles.

Late last month, for example, Meri returned from what she described as a “fulfilling, relaxing, invigorating, rejuvenating” vacation, writing on Instagram:

“I’m learning that as I surrender my hopes and dreams to God and the universe, and as I move forward with intention, doing the work that needs to be done, that the doors will continue to open.”

In mid-April, Brown went into even more detail about the influence a certain higher power now has on her life.

“I was called to love, not to hate,” she wrote about two weeks ago, continuing:

“I am not here to judge, to correct, to hold accountable, anyone but myself.”

The TLC personality went on in this caption by reflecting on some of her plans for the future:

“I’m here to be a safe place, to have an open mind, heart, and home, and to make others feel loved and cared about. I am here to laugh, to enjoy life, and live it to it’s… fullest.”

But can Meri really live life to the fullest when she remains in an unhappy relationship?

During the Sister Wives Season 16 one-on-one special, Meri and Kody confessed how distant their spiritual marriage has become.

“She is still part of the family, but I’m not ever going to be in a conjugal relationship with her because I’m not going to go through that emotional torture ever again,” the father of 18  told host Sukanya Krishnan on the January 30 episode.

Meri later confessed on the installment that the two hadn’t been intimate in “maybe a decade,” adding that they are “just friends” at this point.

And yet: she isn’t going anywhere.

“Kody has said some things to me more recently that leads me to believe that there’s no repairing our relationship,” Meri also said to Krishnan.

“There are days when I get very, very discouraged.”

As for why she’s sticking around?

“My goal and my purpose and my point is to just be a better person and to just look at the family because there’s value to that. There is value to this family that we have created.”