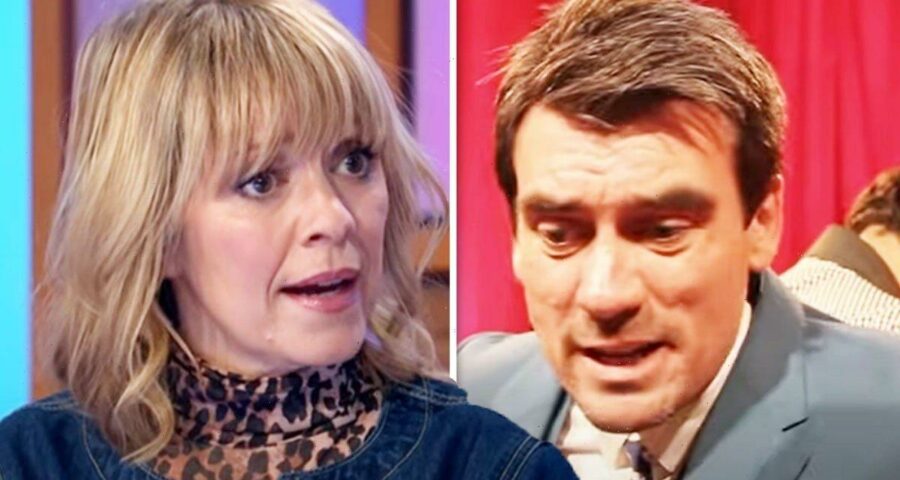 Zoe Henry, who plays Rhona Goskirk on Emmerdale, has addressed the possibility of a name change on the ITV soap if she tied the knot with Marlon Dingle (played by Mark Charnock). It comes as the on-screen star opened up about her family life with her husband Jeff Hordley, who plays Cain Dingle on the programme.

The 48-year-old admitted she is “absolutely fuming” at the possibility of adopting her husband’s moniker.

Zoe’s character is engaged to Marlon and the on-screen couple is currently going through heartbreak as the latter will return to hospital following a recent stroke, in scenes set to air next week.

The Yorkshire Dales soap star cheekily admitted having a gripe about her character Rhona becoming a Dingle like her husband.

Rhona and her on-screen beau are yet to get married but she has no interest in adopting Dingle as Zoe’s real-life husband also shares the exact surname on Emmerdale.

Addressing the potential name change, Zoe was quizzed on whether she would welcome officially becoming a Dingle.

“No! I’ve had this conversation, I’m absolutely fuming, I don’t want Rhona to become a Dingle,” she cheekily admitted.

“I don’t know if it’s because Jeff’s a Dingle in the show so I’m a bit like, ‘No, that’s too close. I don’t want to have the same surname as his character in the show.'”

Zoe added that if she were to wed Marlon on the programme she would prefer to keep the surname Goskirk as she will avoid having to “drink out of a welly”.

The small-screen star also gave a rare insight into her home life with her other half Jeff.

The actress said being on the soap coupled with family life can be “exhausting” as the actress insisted that she and her other half take everything in their stride together.

The Emmerdale star shared the couple has a tendency to leave everything going on at work at the ITV studios.

Addressing their home life in the same interview, Zoe talked about switching off from the Yorkshire Dales, as the couple juggles children, pets and their allotment.

With so much on the couple’s day-to-day list, the Rhona Goskirk actress admitted if she doesn’t totally forget about work she’d “go mad”.

“Jeff and I have become really good at just coming in the door and leaving everything back at the studios really,” Zoe explained.

“You have to, otherwise it’s just exhausting, and we’ve got kids, dogs, the allotment and various things going on here that are more than a distraction.”

She added to OK! magazine: “I think if I took all of that home every night, I’d go mad.”

The couple began their respective Emmerdale journeys two decades ago, and in that time they’ve had two children, Stan and Violet.

The TV star often takes to social media and shares updates working on the couple’s allotment and their homegrown produce.

Zoe and her husband Jeff have become firm favourites on the ITV soap.