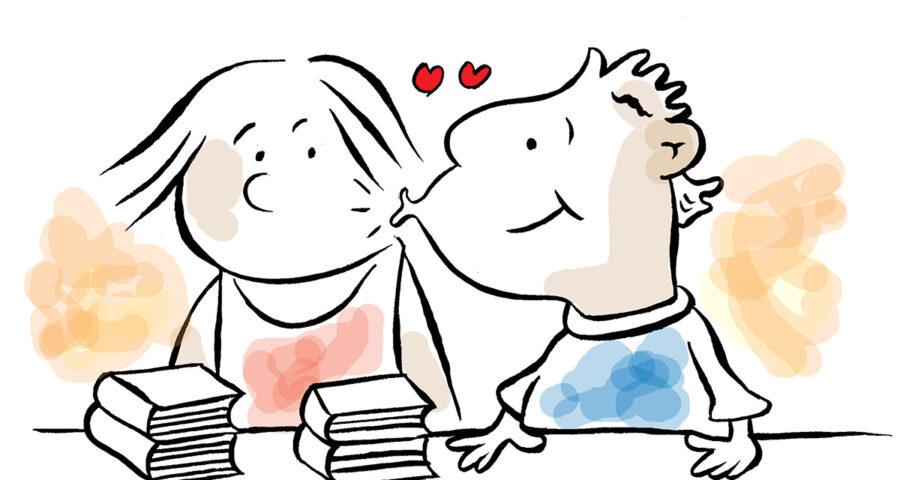 Meet Rediff.com‘s Love Guru, who says, ‘I’ve been told I give some pretty great advice. And some people think I’m funny, so if I can give you a laugh or two after your girlfriend stuck a fork in your face, why the hell not?’

So if you feel you want some personal advice, do write in to [email protected] (Subject: Ask Love Guru).

If you wish to remain anonymous, do let us know and your name won’t be disclosed when publishing responses to your queries.

Dear Love Guru,
I have been friends with a guy since class 7.
Our parents know each other so we are family friends too. I am 19. He is 20 and we study in different colleges but live in the same neighbourhood.
Recently, his parents suggested that we should do group study at my place to help each other so we agreed.
One day while we were sitting close, he casually kissed me on the cheek and tried to get intimate. I didn’t know what to do but I didn’t resist either. I had mixed feelings at the time.
I don’t know if he is right or wrong.
When I spoke to my friend she said I shouldn’t have let him kiss me.
So the next day, I made some excuse that I have extra class so we won’t be able to study together.
After that he hasn’t called or spoken to me.
I also find it awkward to face him or ask about the incident.
What should I do now?

What you should do is stop allowing your friends to make decisions for you! Who is she to say whether you should or should not have allowed him to kiss you?

You are to decide that; you said he caught you unawares and you had mixed feelings about it, but it is up to you whether you want to pursue the prospect of a relationship, isn’t it? And a kiss on the cheek doesn’t sound like he was trying to get fresh with you.

After you ditched him the next day, he probably assumed that you don’t want to take things any further and so hasn’t called.

So here’s what — figure out for yourself first whether you like the idea of a relationship with him. And then speak to him about it.

Whether you think you’re better off as friends, or whether you want to give things a try with him, you need to talk things out with him. And you’ve known him for years, so it shouldn’t be too difficult.

Dear Love Guru,
My husband doesn’t like to use condoms. He says it doesn’t feel good, ie the sex is not as fun.
I am not sure if I should go on the pill. Won’t it harm my health?
Anyway condoms are not fully effective. We already have three children.
What do you suggest I do?

I would suggest that you consult a gynaecologist, my dear!

I am not qualified to give you medical advice.

Many women get fitted with IUDs as an alternative to birth control pills, but like I said, you need to discuss these options with your doctor.

Dear Love Guru,
One of my colleagues is married and so am I. He knows that. He made a pass at me at work. Nothing terribly bad. Should I inform HR?

That is entirely up to you; if you are feeling uncomfortable or harassed, then you certainly should report it.

Since you’re saying, however, that it was ‘nothing terribly bad’, you could just warn him off and make it clear that you’re not interested and don’t appreciate his making passes at you because you’re married and he’s a colleague.

If he gets the message, great; if not, then you can report him at a later instance.

Hello. I want this to be anonymous.
I’m 25 year old and I have been in a relationship for the last 4-5 yrs with my childhood friend .
According to me she is a complete attention seeker and dosent care about my emotions. Like she used to text boys who proposed her and delete the messages which she replied but used to keep the messages which they did and send me that they are flirting with me I never used to ask for those screenshots anyway she herself would send me those says that only they are messaging her even thought she isnt responding once she fogot to delete one message where I caught her and we had a huge fight regarding and then she claimed i have i deleted the messages and I promised she will not repeat it again but she totally did it multiple times and I caught her doing that multiple times and she used to flirt with people who proposed her and once we were have lunch in a restaurant and one person who has intrest in her came to the same place and was sitting behind us and she suddenly stood up and sat infront of me where she could see him or vice-versa like how can she do that when I’m around and there are many other fights she has a best friend she shares with him everything last year I broke up with her due to all these reasons and we pathed up after 2 months , after getting back her friend asked her if she is talking to me or not she simply replied shes not talking to me even though we are fine and happy and just last month one of my cousins was flirting with me and I showed her the messages and was being open to her but never crossed a line but she went behind my back and talked to my cousins elder brother who is my own sister’s husband that his sister is flirting with me even thought i myself made it clear there’s nothing going on, after all this she is calling me to get back with her and she promises that she won’t repeat the mistake never again which she already did n number of times what should I do I’m not fine and I think I’m depressed I’m spoiling my career thinking about this.

Looks like this leopard isn’t going to change her spots in a hurry, my friend!

She’s full of lies and false promises and let me tell you, people rarely change. You have to accept them for who they are.

So, if I were you, I’d end this relationship. She doesn’t sound like anyone worth wasting anymore time over.

You’ll always be looking over your shoulder, and you’ll never be able to trust her.

She’s driving you nuts already; it’s just time to call it a day with this relationship. There are plenty of other fish in the sea!

Hi.
First of all would like to stay anonymous.
Been married for 9 yrs. 5 yrs after marriage had a kid. We were having issues during this time though it was not very huge (that’s what I thought). My mom and she were having issues, which were spilling over to me too. She was from a small town and always comparing how easy life is there as against the metro life (i Always been here and like it). She used to go her town for some reason or other for extended periods of time. But v were in love.
Few years after the kid, she started becoming aloof. I suspected something wrong. This time when she went back to her place too rarely used to call me or answer my calls. When she came back, I checked her phone and found her sharing her feelings with her guy friend for him. This upset me and i shared her betrayal with family and friends out of anger.
But she tried convincing me that he is just friend etc. After my few weeks of anger, i said let’s work on the relationship and let me know what to do. I sent mom over to another house too.
However one day she said she wants to meet her parents and come back. Once she went there, she didn’t tell me when she plans to come over. Her parents kept telling that she will come after so and so. After 7 months, she said that she won’t come back to my city.
She said she wants to separate. I tried hard convincing her that things will change and she should give the relationship a chance. She also avoids going to counsellor.
After me visiting her place for few number of times, she seems to now suggest that she will come for sometime to my city and go and i can also visit her for sometime. She is not agreeing to move to the city and stay with me. She has admitted our kid to the school there. She rarely talks on phone to me.
Though my kid calls me often. She mentioned that the guy got married and she is not in touch. What do you think i should do? Wait for her to come around or legally separate and move on?( 40 now)
I am confused. She says she can’t say about the future but currently she doesn’t want to stay in my town.
Regards

You have a child together and it sounds like you both still want the marriage to work. So here’s what you should do, at least for now — compromise.

She absolutely must commit to seeing a marital counsellor with you and, in exchange, she can live in her hometown for the moment and you undertake the commute to see her and your child regularly.

There’s no other man in the picture anymore and she’s obviously been through a lot; you’ve been oblivious to her misery living with your mother all those years.

And, as a result, she went and had an emotional, if not physical, affair.

I understand your frustration but making that information public made everything worse. That’s probably the main reason why she doesn’t want to live there anymore and you need to understand that.

Your marriage needs a lot of work; make the effort, both of you, to save it.

This column is not for the psychologically disturbed, or those who need professional help for severe mental trauma. It’s for those who can’t discuss their issues freely with parents, or friends or partner. Or dog. Or just want a fresh perspective from an unbiased, objective-thinking individual.

Maybe your partner is the problem? Or maybe you are the problem and just don’t know it. And need Rediff.com‘s Love Guru to tell you just that.

So if you feel you want some personal advice, do write in to [email protected] (Subject: Ask Love Guru).

If you wish to remain anonymous, do let us know and your name won’t be disclosed when publishing responses to your queries.

The questions and answers in this advisory are published to help the individual asking the question as well the large number of readers who read the same.

While we value our readers’ requests for privacy and avoid using their actual names along with the question whenever a request is made, we regret that no question will be answered personally on e-mail.

Please note: All content and media herein is written and published online for informational purposes only. It is not a substitute for professional advice. It should not be relied on as your only source for advice.

If you choose to rely on any information provided herein, you do so solely at your own risk.

Opinions expressed herein cannot necessarily provide advice to fit the exact specifics of the issues of the person requesting advice.