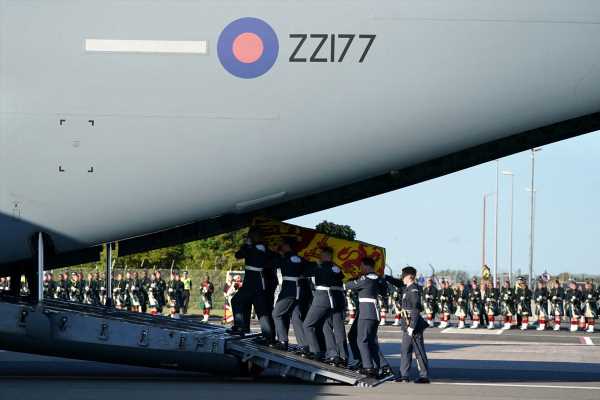 On Tuesday night, Britain’s Queen Elizabeth II stayed at Buckingham Palace in London, where she lived almost all her life, for one last time.

After her body arrived in London from Edinburgh on a Royal Air Force C-19 Globemaster aircraft on Tuesday evening, it was driven to Buckingham Palace after a sombre ceremony at the Royal Air Force’s Northolt base.

On Wednesday afternoon, the queen’s body will be taken to Westminster Hall, where it will lie in state till Monday morning on the day of her funeral, enabling an estimated half million Britons to pay homage to their late monarch.

King Charles III, his sister Princess Anne — the princess royal who accompanied her mother’s body from Balmoral Castle on its six hour journey to Edinburgh and then to London — his younger brothers Prince Andrew, the duke of York, and Prince Edward, the earl of Wessex, will walk behind their mother’s coffin, a journey of 38 minutes.

Prince William, the prince of Wales, and his estranged brother Prince Harry will also be present.