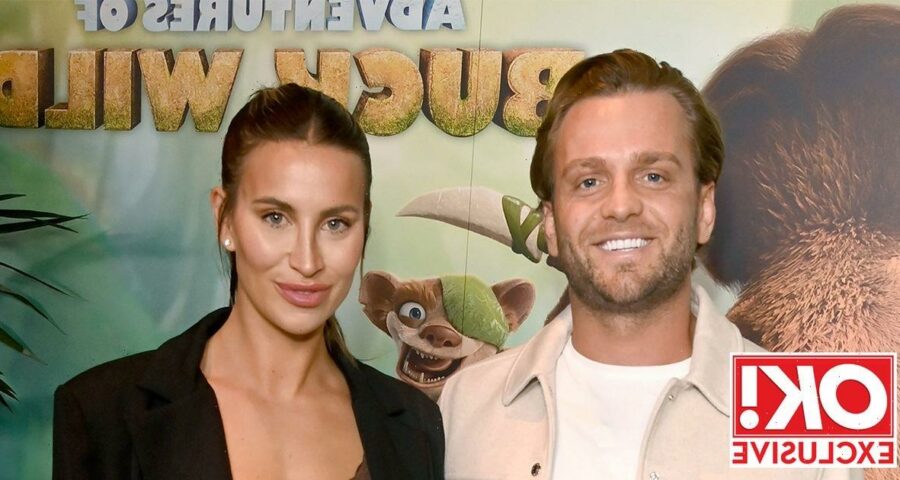 Ferne McCann greets OK! with a beaming smile on her face as she sits down for our chat.

And it’s no surprise the former TOWIE star is grinning from ear to ear as she tells us that her new boyfriend, Lorri Haines, has made the big move from Dubai to the UK to be with her.

“He’s back here now for the foreseeable future, which is really exciting,” a smitten Ferne tells us.

“He weighed everything up and his son’s here and lots of his other businesses are in the UK. And obviously he’s met the love of his life now so he’d be a bit foolish to live in a separate country,” the 31 year old says, laughing.

She adds, “It just made sense for our family moving forward and for his businesses to move here.”

Although things may now appear to be the picture of happiness, their romance hasn’t come without its obstacles. In February, old photos of her businessman boyfriend with suspicious powder surfaced online, soon after they went public with their love.

Lorri denied taking drugs, but later shared a public statement where he said the videos were taken during “a destructive time in my life” which was a “long time ago”.

“I changed my lifestyle for the better a long time ago but like most people, I have made stupid mistakes and done things I am not proud of,” he added. “I never thought these actions could possibly hurt anyone else either. These things do not reflect the person I am today.”

However, Ferne seems determined not to let the court of public opinion ruin her romance with Lorri – who she says she knew was The One “from the first day” she met him.

“I’m laughing because I know that sounds mad, but it’s the truth,” Ferne tells us.

Ferne and Lorri met in early 2022, hours after she had a conversation with her TOWIE co-star Danielle Armstrong, 33, and Tom Edney, who are set to get married this year, about how you know when you’ve found your perfect match.

Ferne recalls, “They said when they met each other – even though they knew each other for many years – but when they rekindled, they had this ‘when you know, you know’ moment. And I was like, ‘I just don’t think I’m going to have that moment.’”

She adds she hadn’t given up on love, but didn’t know if she could see herself being swept off her feet.

“I was really going into 2022 OK with just being like, ‘Do you know what, what will be will be, whatever. I don’t think I’m going to get that romcom, when you know you know, he’s The One moment,’” she says. “And that night I met Lorri.”

And although their romance has been somewhat of a whirlwind, Ferne has that gut instinct that it’s the right relationship for her.

“It feels different because I’m different,” she explains. “I’ve learned from past relationships and I’ve grown and evolved, not just through relationships but through life as well.”

With their romance going so strongly, Ferne – who previously dated fellow TOWIE star Charlie Sims and Arthur Collins, who was found guilty of an acid attack in a nightclub – has integrated her new man into her life with four-year-old daughter Sunday. And it’s clear he’s already got the seal of approval from Ferne’s only child.

But the First Time Mum star makes it very clear her daughter will always be her number one priority.

“Put it this way, I wouldn’t be with someone if there were any difficulties or if she was uncomfortable or unhappy,” she tells us.

Things are going so well with Lorri that Ferne has even contemplated expanding her brood. The star, who is relaxed in a T-shirt and messy bun during our chat, explains she’s come to the conclusion she does want more children.

“My mind used to change like the wind,” she says. “If I got asked in an interview, ‘Do you want to have more children?’ it really just depended on what mood I was in. But now I can really see what my future might potentially look like and I’d love to extend and grow my family.”

It’s not a decision the busy mum is taking lightly though, as she adds, “It would definitely change the dynamic, because it’s always been me and Sunday. But I’ve got a sister, I absolutely loved having a sibling and, of course, I want that for Sunday.”

Although Sunday hasn’t yet asked for a little brother or sister, Ferne thinks the tot will embrace her sibling duties.

But Ferne looks thrown when we ask her if she’d want a baby boy or a girl to add to her family.

“I’ve not really thought about it,” she says, before pausing to consider her answer. “It’s funny because I feel like, for Sunday’s sake, I’d want to have a boy. I’m literally just thinking, I’ve not given any thought to this whatsoever!

“But I think I’d want to have a boy because she would be my little girl still. But then I think if Sunday had it her way she’d probably want a baby sister.”

Very much looking forward to the future, Ferne has also thought about saying “I do” to Lorri one day – and is even scoping out engagement rings.

“Last night I was strategically on Pinterest scrolling through engagement rings while he was lying in bed next to me. So yeah, I’m not afraid to say what I want,” she laughs.

“All jokes aside, I’ve dropped a few subtle hints, put it that way. There’s no point wasting time, is there? When you know what you want, you might as well go for it.”

Ferne isn’t the only TOWIE tar who is said to be loved-up currently. Her close pal and one of the show’s original cast members James Argent, 34, has recently been linked to The X Factor singer Louisa Johnson, 24.

But ever the good friend, Ferne remains tight-lipped about her knowledge of any romance.

“I don’t want to give anything away,” she says as she’s quizzed on Arg’s love life rumours.

“Just in case he has but, from my understanding, he hasn’t. But listen, sometimes you keep certain things from people. If he has, then amazing news, I can’t wait to meet her. But I’m pretty sure he hasn’t.”

As Ferne begins to apply some make-up during our interview, the multitasking mum tells us she and Arg chat on FaceTime every day.

She adds, “I think when someone goes through their ups and downs and their struggles in life, ultimately, with true friendship, you just want the best for that person. So for him to be, at this moment in time, doing so well and living his life as he should and being super positive, then great things are coming his way.”

Great things are also coming for Ferne’s close pals Sam Faiers and Billie Shepherd, as Sam, 31, is set to welcome her third child later this year, which Ferne says she’s “really excited” about. But the trio are struggling to find time to meet up with their busy schedules.

“The three of us keep trying to get a date in but that’s even harder [than ever] as you can imagine,” Ferne says.

While Sam is expanding her family with partner Paul Knightley, Ferne reveals that Billie, 32, and her husband Greg are busy focusing on completing and moving into their renovated Essex mansion.

“I think at the moment their house is their main priority,” Ferne explains when we ask if her close friend wants more children.

“I can’t wait to see the place. I, like the rest of us, have only seen it on Instagram. Obviously I know it’s been a long road of them building, but it’s so exciting for them. I think she’s just ready to move in now.”

It looks like this year is set to be an exciting one for the mum-of-one and her Essex pals, and when we ask what her future hopes and plans are, Ferne says, “I’m really just enjoying life at home, which sounds absolutely ridiculous because we’ve been staying at home throughout the pandemic, but I’m such a home girl.”

And when we ask her what drew her to her new partnership with restaurant chain Fridays (formerly TGI Fridays), she explains, “This is what I love about Fridays – I love bringing people together.

“I always say in my friendship group that if it wasn’t for me, we wouldn’t see each other because I love bringing people together through food. I’m excited to be involved in this campaign about getting together, eating good food and having good times.”