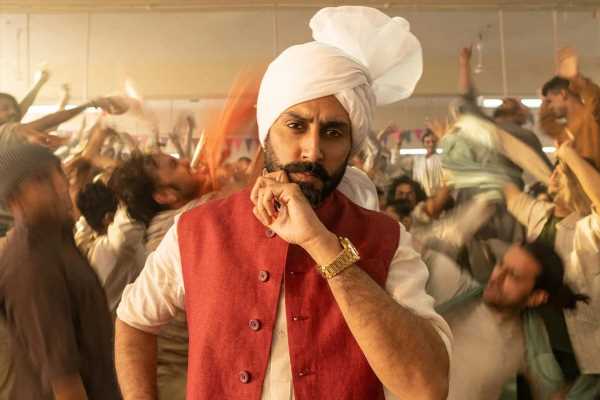 Abhishek packs a punch and Nimrat is deliciously wicked, but Dasvi falls short of being the razor-sharp satire it deeply aspires to be, observes Sukanya Verma. Abhishek Bachchan has found his groove.

Over the last few years, the actor has made a conscious effort to push the envelope across roles like Manmarziyaan, Ludo, The Big Bull, Breathe: Into the Shadows and Bob Biswas.

Hit or miss, he stayed the course.

Dasvi is a fruit of those adventurous, unwavering efforts.

It’s a performance marked by aplomb and acumen that highlights the breadth and depth of his skills and shows him off in never before light.

It’s the same for Nimrit Kaur.

As the unexpected opponent whose meteoric rise and moral decline are inversely proportional to her significant other loitering in prison, Kaur is deliciously wicked.

Too bad the social comedy they duel in hasn’t thought it through and Dasvi falls short of being the razor-sharp satire it deeply aspires to be.

Directed by Tushar Jalota, Dasvi takes a jolly good jab at the terribly low standard of politicians in our country while making a case for younger, literate candidates with progressive views to run office.

There’s enough merit in the idea alone for us to cheer wholeheartedly at the underdog’s triumph but Jalota’s simplistic depiction and ham-fisted manner bungles the all-important balance between humour and purpose.

Set inside the fictional state of Harit Pradesh, a cross between Uttar Pradesh and Haryana, Bachchan Junior plays Ganga Ram Chaudhry, the cocksure chief minister in judicial custody on corruption charges vowing to complete tenth grade after he is mocked and slighted by the no-nonsense prison warden Jyoti Deswal (Yami Gautam Dhar).

Jalota and his battery of writers (Ritesh Shah, Suresh Nair, Sandeep Leyzell) don’t dwell into the controversy or Ganga Ram’s crooked side. Like the proverbial good bad guy of a feel-good entertainer, he engages in funny business but retains a golden heart.

As dubious as these sentiments are, Ganga Ram’s friendly camaraderie around his fellow inmates — Ghanti, a vertically-challenged math genius (Arun Kushwaha), Imandar, the mild-mannered engineer (Rohit Tiwari), Prem Qaidi, a poet in love with a girl from another caste (Sumit Shekhar Rai), Rae Bareilly (Danish Husain), a quick-witted librarian — insist we look the other way and ignore the ridiculously comfortable lodgings he enjoys behind bars, equipped with a bed, rocking chair, laptop, cell phone, cop at his disposal (the delightful Manu Rishi Chadha), not to mention the permission to burst into impromptu group dance sessions befitting a Salman Khan potboiler.

Reform is underway when the middle-aged brat discovers the value of education over lessons on probability, organic chemistry and India’s struggle for freedom.

Often Ganga Ram’s sleepy conscience is hit by moments of epiphany and inspiration as India’s war of independence takes a live-action turn in his imagination fuelled by the accomplishments and activism of all its great leaders from Gandhi, Bose, Maulana Azad, Chandra Shekhar Azad.

You can predict the rest in your sleep.

Thrust into politics after her husband’s arrest, from feeding fodder to cows to a power-drunk proxy CM willing to crush her better half if need be, Bimla’s about-face is as hilarious as it’s baffling.

Dasvi never gives us any glimpse into their marriage.

They talk to each other, tease each other in bulky Haryanvi twang but there’s nothing husband and wife about their exchange. It’s infuriatingly impersonal.

If not for the actors and the easygoing wit and charm they possess, Dasvi would struggle.

Director Jalota’s sympathy for the devil shows in his comical perception of Ganga Ram and Bimla Devi’s skewed morality.

They are unscrupulous in the same way Munnabhai is a fun thug with a golden heart.

Bachchan and Kaur’s likability comes in handy on such occasions.

In comparison, the free flowing banter between Bachchan and Yami Gautam Dhar packs in crunch and bite.

Yami is a picture of hardheaded authority but when it’s time to thaw, she is generous with grace.

The women of Dasvi are firm and fearless in their virtue and vice.

What I found interesting is how Ganga Ram is neither offended nor insecure by Bimla’s turnaround or launching offensives against the caustic jailor.

Instead, he decides to be the change he wants to see.

Some better writing and Dasvi would be too.