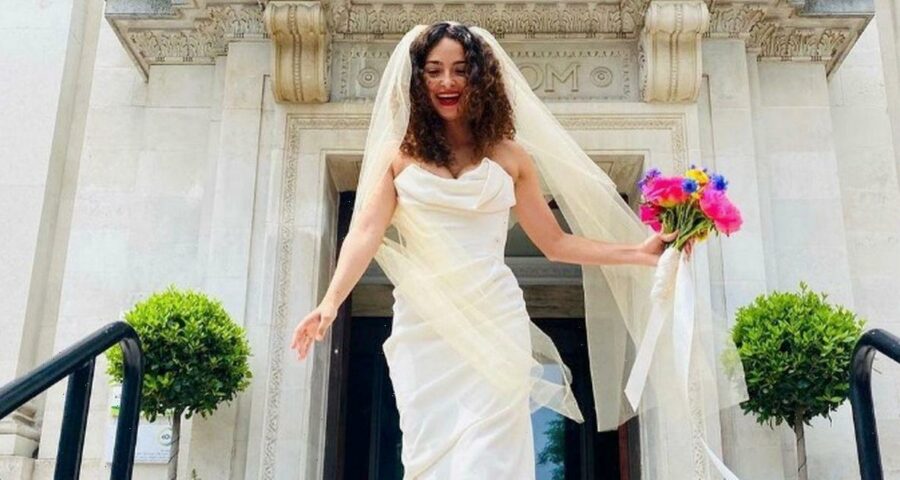 The couple look elated in the pictures as they finally tied the knot after being forced to cancel their wedding plans earlier this year due to Covid restrictions.

With restrictions now being eased, the actress and her partner of seven years were able to celebrate in style yesterday and took to Instagram to share the happy day with her followers.

The Witcher star beamed in photos as she was pictured with her new husband at Islington Town Hall in London, where they held the nuptials.

The elated bride was joined by her new husband in a fun shot as he peered out from behind her as he placed his hands round his new wife’s waist. A guest also sneaked into the shot and can be seen in a bright red dress.

Anna wore a strapless, cream, fitted wedding dress for the big day and she had a long veil and held a very colourful bouquet of flowers.

The stunning brunette also had her long curls down, falling around her shoulders.

The actress also shared a photo from behind as she entered her wedding venue, which showed off the beautifully sculpted back of her dress.

The couple were also pictured in a fun shot with some of their guests who all seemed to embrace a bright colour theme and all having fun as they held their arms up and posed for the picture.

Anna, 29, cheekily captioned the pictures, “introducing my first husband” with a ring emoji and a purple devil emoji.

The actress took to Instagram back in March when the couple were due to tie the knot, and shared her frustration at the delays in her wedding plans due to the pandemic.

She told her followers, “Today was supposed to be the day we got married down the registry office with our parents (because… f**king hell, joy please!) but COVID had other plans. Ah well.

“I was gunna wear this dress so figured I’d wear it anyway and we’d drink champagne all day. Swings and roundabouts.”

The Hollyoaks star is best known for her role in the soap as Ruby Button but is also known for playing Romilda Vane in the Harry Potter films.

The actress also recently starred in the Netflix series The Witcher where she took on the role of Triss Merigold.