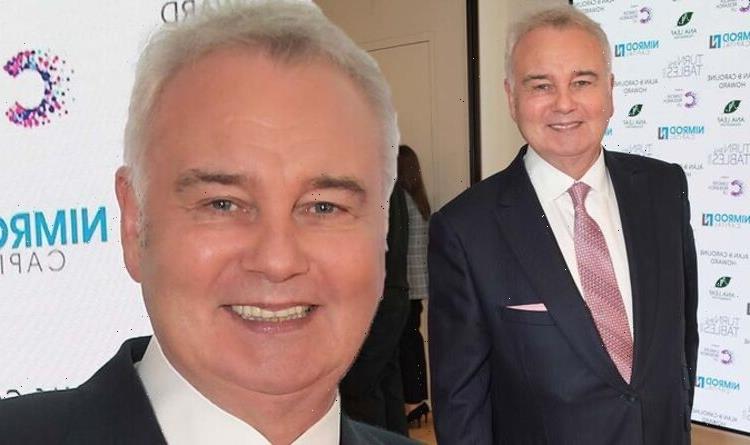 Eamonn Holmes, 62, has been pictured with his walking stick in hand as he attended an event today. The GB News presenter looked dapper posing alongside his co-star Isabel Webster at Turn The Tables 2022.

Eamonn posed for the camera as he smiled broadly despite his recent confession about his health woes.

The TV star was walking with the aid of his walking stick at the event held at BAFTA Piccadilly in aid of Cancer Research UK.

Eamonn has been struggling with chronic pains after trapping a sciatic nerve in his back.

He previously admitted that he felt like a nuisance to his family due to his walking issues, his wife Ruth Langsford recounted.

Speaking on Loose Women about her husband’s health issues, Ruth confessed that Eamonn’s comments on his health made her feel sad.

She said: “Eamonn started his new job this week and because of that he’s been giving a lot of interviews, as you do.

“People have asked about his health because he’s had a really rough year this year.

“Bulging discs in his back, he hasn’t been able to walk properly, it’s transferred down his leg and he’s really finding it hard to walk,” she continued.

“He said in this interview, which actually made me feel a bit sad, he said, ‘I think my family are a bit fed up with me now.’

“He said, ‘The kids are a bit embarrassed about how I move around or don’t move around, and Ruth’s getting a bit fed up with me.’

“You can’t help, but when you’re helping someone all the time and they’re very incapacitated it’s hard to be Florence Nightingale all the time,” she explained.

Eamonn has candidly explained how he believes his health woes affect his family life in an interview with The Sun.

Speaking about filming a programme for the BBC called Farm To Feast, Eamonn revealed how the director was forced to use “clever tricks” in order to hide “how much he was struggling”.

Eamonn said: “It’s slow progress, and part of the problem is you feel like you have to hide it all the time because as soon as people think you’ve got an issue like this they write you off.”

He said the pain, which he described as “agony”, stops him from executing some daily tasks.

The presenter continued: “Even my own family are bored of my moaning.

“It has caused some strain and Ruth is fed up of hearing about it and of me saying I can’t walk the dog or tidy up, but I can’t help it. It’s agony.”

However, he highlighted that taking the painkiller Tramadol helps him cope with the pains.

He also exercises with his trainer James, who has previously worked with Premier League footballers and whose methods get him “moving in the mornings”.