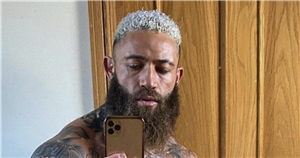 Ashley Cain has had to pull out of his celebrity boxing match which was due to take place this Saturday, he informed followers regrettably on Thursday.

The Showstar Boxing event at SSE Wembley was being held in honour of the 31 year old’s late daughter Azaylia, who tragically passed away in April 2021 at eight months old after a tough fought battle with leukemia.

Ashley had been training hard in the weeks leading up to the fight against American YouTuber Andreas Eskander – who cancelled the match days before the big day.

“I am gutted to announce that due to my opponent pulling out of the fight, I am no longer going to be entering the ring this Saturday,” the Ex on the Beach star captioned the pic.

“As everyone who follows me knows I have given this camp blood, sweat, tears and everything else so I am naturally very disappointed for myself, the promotion and everyone out there who is supporting me.

“But hopefully it’s only a minor setback and the aim is to be back on a @showstarboxing promotion in the future. I wish all the fighters best of luck on Saturday…”

Just hours before the cancellation, Ashley had revealed the results of his tough regime getting in shape for the match, posting photos of his ripped physique in the mirror as he told followers he was “feeling in great shape physically and mentally for this fight”.

The reality star shared on Instagram last week that he had cut out sugars and carbs and “upped the work rate” in order to achieve his muscular appearance, before he admitted it had been hard work.

Ashley wished to raise awareness with the match of the brave fight his daughter Azaylia — who passed away at eight months old — had gone through with her health in the months prior to her tragic death.

“It was important for me to take on this boxing challenge because my daughter fought a heroic battle against cancer on this earth for eight months. So I want to honour those eight months with eight bouts in the ring,” Ashley told The Sun.

“I am fighting because my daughter had to and for all those children who are still fighting this monster.”

Ashley exclusively told OK! that he had hoped to raise money with his match to give to The Azaylia Foundation, the cancer charity he set up with partner and Azaylia’s mother, Safiyya Vorajee.

"And I'm hoping to be able to donate some more money personally as well, after the fight. I've heard along the grapevine that some of the fighters on the event are also looking to do the same thing. So, it'll be absolutely amazing."