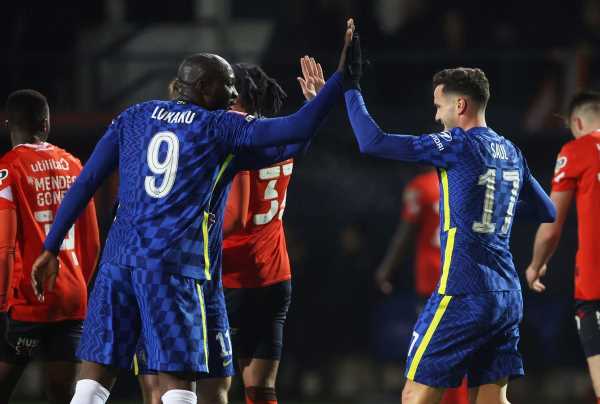 On a seismic day in the history of Chelsea Football Club it was perhaps fitting that Romelu Lukaku, their record signing, scored the winning goal in a 3-2 FA Cup fifth-round victory at second-tier Luton Town on Wednesday.

For most of a damp evening at Kenilworth Road it seemed the European and world champions were going to suffer a humiliating exit, hours after Russian businessman Roman Abramovich announced he was putting the club up for sale.

But Lukaku, the epitome of Chelsea’s spending power in the 19 years of Abramovich ownership, slid in to convert Timo Werner’s low cross in the 78th minute.

News of Abramovich’s decision, amid growing calls for him to be hit by sanctions after Russia’s invasion of Ukraine, had the packed crowd abuzz before kickoff.

The Chelsea fans chanting his name were silenced after two minutes when Luton defender Reece Burke planted a textbook glancing header into the corner from a corner.

Saul Niguez levelled after 27 minutes but an intrepid Luton side restored their lead before halftime as Harry Cornick beat Chelsea keeper Kepa Arrizabalaga.

Luton looked capable of holding on for a giant-killing but Werner equalised in the 67th minute after being picked out by a lofted pass from Ruben Loftus-Cheek.

Chelsea dominated the second half and Lukaku, out of favour of late despite his near 100 million-pound ($134 million) price tag, had the final say as the London side rebounded from losing Sunday’s League Cup final to move into the last eight.

Luton’s squad has a combined value of less than 20 million pounds, according to website transfermarkt, compared to Chelsea’s near one billion and Chelsea’s three scorers alone were signed for a total of around 160 million pounds.

Lukaku was bought twice with Abramovich’s money. He was sold for 28 million pounds to Everton in 2014 and bought back for more than three times that figure.

Such eye-watering figures are why Abramovich’s announcement on Wednesday sent shockwaves through English football.

Manager Thomas Tuchel, who just over a year ago became the 11th full-time manager in the Abramovich era, said he had found out the news not long before the kickoff.

“We heard the rumours throughout the day and the TV is on in the hotel and the guys talk about it, so yeah it is big news,” the German told the BBC. Liverpool booked their spot in the FA Cup quarter-finals as a first-half double from Japanese forward Takumi Minamino secured a 2-1 win over Norwich City at Anfield on Wednesday.

Three days after they won the League Cup to clinch the first major trophy of the season, Liverpool dominated Premier League strugglers Norwich in the early stages.

Minamino’s first goal ended a fine Liverpool move, with Divock Origi, given a rare start by manager Juergen Klopp, setting up his team mate in the 29th minute.

A powerful finish from Minamino eight minutes later put Liverpool in command and Alex Oxlade-Chamberlain almost added a third midway through the second half.

However, Norwich refused to give in and Lukas Rupp gave them hope with an arrowing strike 14 minutes from time.

That ensured a nervy finish at Anfield, with home goalkeeper Alisson forced to deny Norwich substitute Jonathan Rowe, but the hosts held on to stay in the hunt for three more trophies this season.

“We have never been in an FA Cup quarter-final (under the German),” Klopp told ITV. “We made 10 changes to the team and we were always going to find it tough against a good team, but we played really good football and scored some really good goals.

“Takumi is an incredible player and tonight was the best game he had for us. He was a constant threat throughout.”

Southampton joined Liverpool in the quarter-finals as they continued their fine form with a 3-1 win over West Ham United.

The home side took the lead in the first half through French full back Romain Perraud, who hammered a stunning strike into the net from distance, before West Ham levelled through Michail Antonio.

James Ward-Prowse’s penalty put Southampton back in front in the 69th minute and Armando Broja added a stoppage-time third to ensure his team have now lost only one of their last 13 games in all competitions. Goncalo Guedes’s stunning strike earned Valencia a 1-0 victory over Athletic Bilbao in the Copa del Rey semi-final second leg on Wednesday to take them back to the final three years after they won the title with a shock victory over Barcelona.

It was no more than Valencia deserved as they dominated the match against a Bilbao side bidding to reach the final for the third consecutive season, after losing the last two to Real Sociedad and Barcelona.

Following a 1-1 draw in the first leg at Bilbao, Valencia, roared on by the crowd at a sold-out Mestalla stadium, created the better chances.

The attacking trio of Guedes and Spanish strikers Hugo Duro and Bryan Gil were a constant menace to the Athletic defence, but they hit a wall in the form of goalkeeper Julen Agirrezabala, who made a string of crucial stops.

But even an inspired Agirrezabala could not prevent Guedes scoring what proved to be the winner in the 43rd minute, as the Portugal winger rifled an unstoppable 30-yard shot into the net following a corner.

“I saw the opportunity and took it. It was an incredible goal,” Guedes told reporters.

“It was an amazing night, starting with the reception that we got outside the stadium, there were thousands of fans, they deserve this more than anything. It is for them.”

Valencia will face the winners of the other semi-final between Real Betis and Rayo Vallecano on Thursday. Betis lead 2-1 from the first leg in Madrid.

A unfortunate stoppage-time own goal from Lorenzo Venuti gifted Juventus a 1-0 win over Fiorentina in their Coppa Italia semi final first leg on Wednesday, as Dusan Vlahovic returned to his former club but failed to make an impact.

Vlahovic moved from Fiorentina to Juve as part of a deal that made him the most expensive signing in Europe’s January transfer window, with his every touch booed by fans in Florence who clearly had not forgiven the Serbian striker for leaving.

In a hostile atmosphere, the home side had the better of the first-half chances, with Jonathan Ikone drilling just wide midway through the opening period, as Juve and Vlahovic were unable to threaten at all in attacking areas.

Vlahovic’s moment came early in the second half, but he could not loft the ball over Fiorentina goalkeeper Pietro Terracciano when put through on goal.

Fiorentina looked the most likely to find a winner to take to Turin for next month’s second leg, with Ikone denied by the post from their clearest opening, before misfortune struck, right at the last.

Juan Cuadrado’s cross was aimed at Vlahovic, but it was misdirected and Venuti could only watch on in horror as the ball bounced off his knee and rolled agonisingly into the net to give Juve a win they did not entirely deserve.

“He (Vlahovic) has to improve playing with the team and tonight he linked up with his team mates much better,” Juve coach Massimiliano Allegri told Mediaset.

“Winning in Florence was not easy because we had so many players missing (with injury). We have given a great sign of maturity.

“Slowly we are improving and the team is finding more and more confidence.”