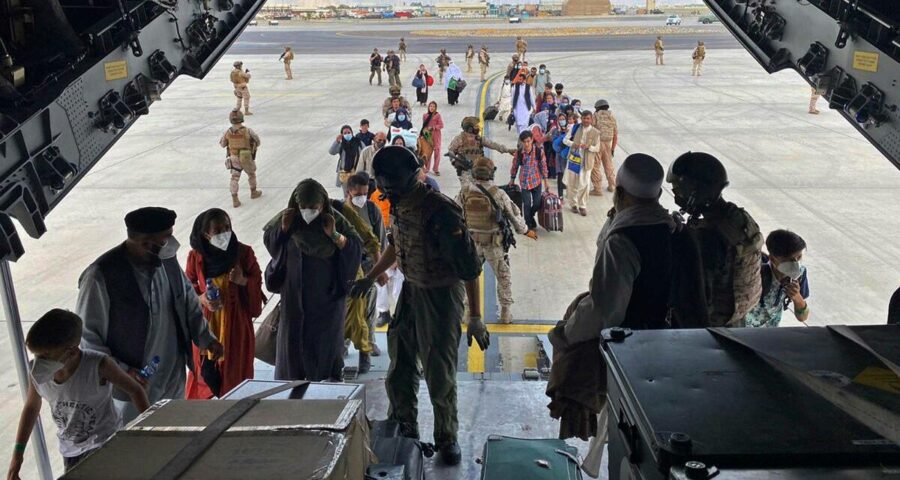 Heart-wrenching videos of parents handing over their children to soldiers from UK and US, in a bid to escape the chaotic takeover of Afghanistan by Taliban, have gone viral on social media.

The visuals highlighted the plight of children as US forces withdrew from the country after two decades, with a UN report finding that child casualties hit their highest levels ever during the first half of this year, with hundreds killed in the recent weeks.

Amid harrowing scenes at the Kabul airport, where desperate Afghans were seen gathering on the tarmac and running along planes in an attempt to escape the country, a video of a child being hoisted over a barbed wire fence was widely circulated. A Reuters report said it was not clear whether the girl was being reunited with her family within the airport premises or if she was being handed over to get her on board a flight leaving Afghanistan.

Another image of a child sleeping on the floor of a US Air Force C-17 Globemaster III echoed the desperation of parents even as the Taliban took complete control of Afghanistan after entering the presidential palace in Kabul on Sunday. “The mothers were desperate, they were getting beaten by the Taliban. They shouted, ‘save my baby’ and threw the babies at us, some of the babies fell on the barbed wire. It was awful what happened. By the end of the night there wasn’t one man among us who was not crying,” a British forces’ Parachute Regiment officer told The Independent (https://www.independent.co.uk/asia/south-asia/afghanistan-airport-kabul-violence-women-b1904817.html).

Meanwhile, a photograph posted by the Aśvaka news agency on Twitter showed an infant who reportedly got separated from the parents at the Kabul airport. The child, who according to the agency, is no older than seven months.

British defence secretary Ben Wallace, however, was quoted as saying by Reuters that the UK was unable to evacuate unaccompanied children from Afghanistan.

The United Kingdom announced it will resettle 20,000 Afghan refugees in the next five years but received criticism when it further said 5,000 Afghans will be relocated in the first year. The US State Department is also processing over 80,000 visa applications for Afghans who worked with the government or find themselves at risk, an official told Washington Post. (https://www.washingtonpost.com/opinions/2021/08/16/biden-must-rescue-thousands-us-citizens-trapped-afghanistan/).

While stating that UK forces will stay in Kabul as long as the US forces are running the airport, Wallace pointed out the toll the chaos is taking on the soldiers. “It is very very difficult for those soldiers as you’ve seen in your own footage, dealing with some desperate, desperate people, many of whom are just wanting to leave the country,” he told Sky News.