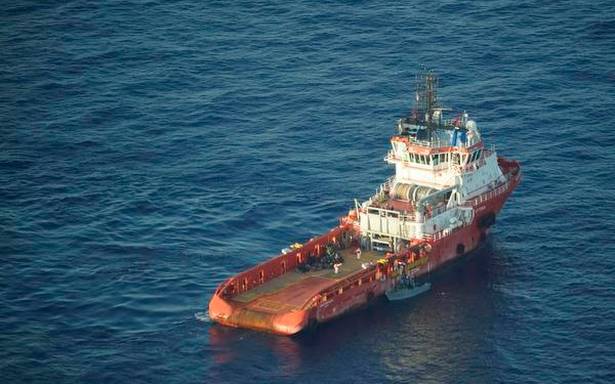 The number of migrants rounded up as part of Libya’s unprecedented crackdown exceeds 5,000 people, including hundreds of children and women — dozens of them pregnant, according to a United Nations tally obtained by The Associated Press on Monday.

The raids left a migrant shot dead and at least 15 others injured, the U.N. said. The crackdown began Friday in the western town of Gargaresh, a major hub for migrants in the North African nation, and spread to surrounding areas. The tally showed the roundup netted 215 children and over 540 women. Among them, at least 30 were pregnant, according to the U.N.

Libyan authorities described the crackdown as a security operation against illegal migration and drug trafficking. Libya has emerged as the dominant transit point for migrants fleeing war and poverty in Africa and the Middle East, hoping for a better life in Europe. Oil-rich Libya plunged into chaos after the 2011 NATO-backed uprising ousted and killed longtime dictator Moammar Gadhafi.

Georgette Gagnon, the U.N.’s humanitarian coordinator for Libya, criticized the raids, in which unarmed migrants have been harassed in their homes, beaten and shot.

But the Interior Ministry, which led the crackdown, made no mention of any traffickers or smugglers being arrested. It has yet to address causalities among migrants and alleged abuses during the raids, including the use of lethal force, that have been raised by the U.N.

The U.N.’s International Organization for Migration report obtained by the AP showed that 5,152 migrants have been detained in the raids since Friday. Those numbers are likely to increase, the report said, as the crackdown continues in several parts of the area, also known as the Andalus neighborhood.

Authorities have distributed the migrants to detention centers in the capital of Tripoli, the IOM’s document said. At least 4,187 of the detainees, including 511 women and 60 children, were sent to the Mabani detention center, well over its capacity. The Abu Salim center received at least 570 migrants, it said.

At least 390 others were taken to Share al-Zawiya detention center, including the 30 pregnant women and 155 children, the document showed. The center has already 182 migrants intercepted previously on the Mediterranean Sea, it said.

These detention centers are rife with abuses, according to rights activists. The AP also reported in June that guards at Share al-Zawiya sexually assaulted young Somali female migrants.

The European Union, which has come under fire for its support of Libya’s domestic efforts to stem migrant crossings in the past, condemned the use of violence in the recent crackdown. EU spokeswoman Nabila Massrali said the union had long been calling on Libya to find an alternative to the system of arbitrary detentions in managing the migrant population.

“While fully supportive of Libyan sovereignty, the EU also strongly encourages Libyan authorities to refrain from the use of lethal force in these operations," she said.

Alexandra Saieh, Libya advocacy manager for the Norwegian Refugee Council, said refugees and migrants in different parts in Libya have been scared to leave their homes, for fear of being detained.

“People are quite horrified,” she said. “This is really a wake-up call to the dire situation that exists in Libya for migrants and refugees and the international community must step up.”