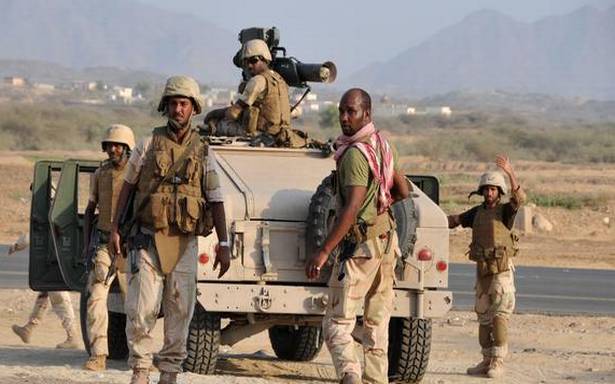 The Yemen’s rebels launched a projectile that killed a Saudi citizen and Yemeni resident in the southwestern Saudi province of Jizan.

Yemen’s Houthi rebels launched a projectile that killed a Saudi citizen and Yemeni resident in the southwestern Saudi province of Jizan, the official Saudi Press Agency reported. Six of the wounded were Saudis and one was a Bangladeshi national, Saudi media said.

Shrapnel also smashed into nearby cars and shops.

The cross-border attack is just the latest in Yemen’s long-running civil war by the Shiite Houthi rebels following an escalation of Saudi-led military coalition airstrikes on the rebel-held capital of Sanaa.

Yemen’s war erupted in 2014 when the Iran-backed Houthis seized Sanaa and much of the country’s north. Months later, the US-backed Saudi-led coalition intervened to oust the Houthis and restore the internationally recognised government.

The war has settled into a bloody stalemate and spawned the world’s worst humanitarian disaster.

Intermittently throughout the conflict, Iran-backed Houthis have staged drone attacks and fired missiles across the border at airports, oil facilities and military installations within Saudi Arabia.

Those assaults have rarely caused substantial damage, but over the years have wounded dozens and rattled global oil markets.

Within Yemen, the Saudi-led bombing campaign has drawn international criticism for hitting non-military targets like hospitals and wedding parties and devastating infrastructure in the Arab world’s most impoverished nation.

Yemen’s civil war has killed some 130,000 people, including thousands of civilians.

Earlier this week the Center for Strategic and International Studies, a Washington-based think tank, reported that attacks by the Iran-backed Houthi rebels on Saudi Arabia have more than doubled this year from last year.

Based on an analysis of thousands of Houthi attacks between 2016 and 2021, it said Houthi attacks on the kingdom averaged 78 a month this year, compared to 38 a month last year.

The cross-border assaults provide a broader view of the regional proxy war between Tehran and Riyadh. Although the regional powerhouses recently have engaged in Bagdad-brokered talks to cool down tensions, peace in Yemen remains elusive as diplomatic efforts to halt the fighting intensify.