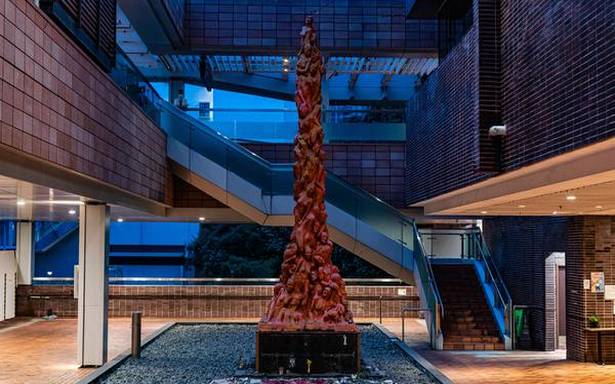 The Danish sculptor of a statue that commemorates pro-democracy protesters killed during China’s Tiananmen Square crackdown in 1989 has asked Hong Kong authorities for immunity from a national security law so that he can come and take it back to Denmark.

The statue, depicting dozens of torn and twisted bodies, has been on display at the University of Hong Kong for more than two decades. After the Alliance disbanded in September with some members accused of national security offences, the university requested the group remove the statue from its premises.

In an open letter on November 12, Mr. Galschiot, who values the statue at around $1.4 million, said he was willing to take it back to Denmark, but that his presence in Hong Kong was necessary for the complex operation to go well.

Cooperation from the university and city authorities for technical assistance, road blocks and permits was also needed, he said.

Additionally, Mr. Galschiot asked for assurances that he wouldnot be prosecuted under a sweeping national security law imposed by Beijing in 2020 to punish what it sees as subversion, secession, terrorism and collusion with foreign forces.

"I can understand from the press that the introduction of the new security legislation in Hong Kong means that there is a legal basis for arresting foreign nationals who engage inactivities that criticise China," Mr. Galschiot wrote.

The statue’s removal "will lead to activities and media coverage that could be perceived as criticism of China. Therefore, I will have to get a guarantee that my employees and I will not be prosecuted."

The university, the government’s Security Bureau, and the Immigration Department did not immediately respond to requests for comment.

The university gave the Alliance a deadline for the statue’s removal, which expired a month ago. It said at the time it was seeking legal advice on what to do with it.

Democratic activists and some Western governments say the security law is a tool to silence dissent and push Hong Kong firmly on an authoritarian path. Chinese and city authorities maintain Hong Kong is still governed by the rule of law and individual rights and freedoms remain intact.