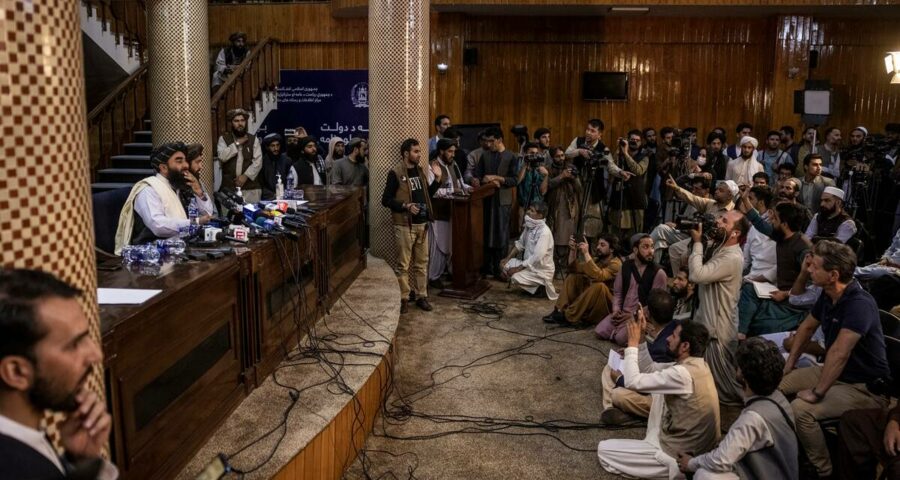 The social media companies, following government guidelines, have largely designated the Taliban as a terrorist organization and do not allow Taliban content on their sites. By Sheera Frenkel and Ben Decker

As the Taliban took control of the Afghan capital of Kabul on Sunday, a spokesperson for the group uploaded five videos to his official YouTube page. The videos, each between two and three minutes long, showed Taliban leaders congratulating fighters on their victories.

“Now is the time to serve the nation and to give them peace and security,” Mullah Abdul Ghani Baradar, a co-founder of the Taliban, said in one video in Pashtun as he sat in front of senior officials in a curtained office.

Dozens of new pro-Taliban accounts that had sprung up on Twitter in recent days then shared the five videos. Within 24 hours, they had together racked up more than 500,000 views.

The videos were part of an effort by the Taliban to establish their authority and legitimize their rule across Afghanistan through the use of social media, researchers said. But by publishing on Facebook and YouTube, the Taliban defied what have been longtime bans by the platforms. The social media companies, following government guidelines, have largely designated the Taliban as a terrorist organization and do not allow Taliban content on their sites.

The group’s renewed presence on social media has put Facebook, Twitter and YouTube in a tricky position. With governments around the world trying to figure out whether to officially recognize the Taliban as Afghanistan’s rulers, the companies have no easy answers as to whether to continue banning the group online.

That has drawn criticism, as the tech companies have in recent months suspended the accounts of some Republican lawmakers and others — seemingly with more ease. Facebook and YouTube removed the accounts of a Taliban spokesperson, Mohammad Naeem, Tuesday only after The New York Times requested comment on the accounts. The companies did not address why the accounts, which were formed in September, had been on their platforms even with the ban on the group.

“So far, the approach of the tech companies is not very effective,” said Ayman Aziz, an independent researcher who has studied Afghanistan and Pakistan for more than a decade. “The Taliban is establishing a new presence, with their new regime, online.”

Representatives for YouTube and Facebook said they forbade Taliban accounts and removed them when they were found. Twitter, which said this week that it prohibits glorification of violence on its platform, did not respond to a request for comment.

The question of what to allow online with the Taliban is only likely to grow for the social media companies. More than 100 new accounts and pages, either claiming to belong to the Taliban or supporting their mission, have been introduced since Aug. 9 on Twitter and Facebook, according to an analysis by the Times. The Times also found dozens of pro-Taliban accounts, including from senior Taliban officials, that had existed for months or years on the sites and lain dormant before becoming more active in the past week.

Many of the accounts are now working in concert to post videos, images and slogans about Taliban rule. Often, they copy one another’s messaging, spreading discussion about the administration of local townships and amplifying assurances that the Taliban brought peace to Afghans. The common thread in all of the activity: praising the Taliban as Afghanistan’s rightful rulers.

“The Taliban’s use of social media is intentional,” said Graham Brookie, director of the Atlantic Council’s Digital Forensic Research Lab, which studies the online spread of information. “They know that on the world stage, they need to present a responsible public face in order to gain more legitimacy.”

The Taliban’s tactics on social media increasingly resemble those of other terror groups that have tried to revamp their reputation, researchers said. Hamas, which controls the Gaza Strip, and Hezbollah, in Lebanon, have used social media to show their softer side, with videos showing them celebrating popular holidays or giving to the poor.

The Taliban’s posts have quickly found a growing audience. Followers of its official Facebook pages jumped 120% to more than 49,000 users as of Wednesday. On YouTube, the group’s videos have started getting tens of thousands of views, up from an average of less than 1,000 views previously.

Brookie said the optics were likely to be difficult for Facebook, YouTube and Twitter no matter what they do because of the Taliban’s reputation for extremist ideology.

“There is a very real debate to be had about the values of allowing the Taliban to remain on social media as they move to close down the rights of the groups they govern,” he said.

Inside the companies, Facebook has in recent days activated an emergency response team to follow the situation in Afghanistan and assess the Taliban’s use of its products, including its messaging app WhatsApp, according to employees at the social network. Twitter and YouTube have tried to read between the lines of diplomatic cables from world leaders on whether the U.S. government would form a de facto relationship with the Taliban, employees participating in discussions at the companies said.

Yet even when the companies have removed Taliban accounts, the bans have been porous. When Facebook this week blocked the WhatsApp account of Zabiullah Mujahid, a Taliban spokesperson, he distributed a new, still-active WhatsApp account of another Taliban leader to journalists.

The Taliban was also easily evading being found by changing the spellings within their hashtags or key terms and using encrypted apps, such as Telegram and WhatsApp, to seed their messaging and ask for volunteers to translate social media posts into multiple languages, said Aziz.

Any dragnet also appears to be mistakenly entangling others who have posted content pushing back against the Taliban. After the news site HumSub published an article this month to counter a local newspaper column praising another Taliban founder, Mullah Muhammad Omar, Facebook removed the article, said Adnan Kakar, an editor at HumSub.

“Immediately, we got a message that, ‘Your article is removed because of standards on dangerous individuals and organizations,’” he said. Kakar said his personal account and HumSub’s Facebook page were also suspended for 24 hours and blocked from livestreaming and advertising for 60 days. When he challenged Facebook, he said he got no response.

Compounding the difficulties facing the platforms, many of the new pro-Taliban accounts have been careful to post content that does not openly espouse violence or hate speech, which would violate the companies’ rules.

On Twitter, a new account named for the Taliban’s unrecognized state, the Islamic Emirate of Afghanistan, surfaced Aug. 8. The account, with more than 400 followers, has posted two videos showing military maneuvers by the Taliban. But neither video featured violent or graphic images or directly called for violence.

Similarly, a Facebook page that was created six days ago, which listed itself as a grocery store but has exclusively posted content about the Taliban, has largely praised Mujahid.

“He is honest. God Bless the Taliban,” read one post on the page. “We will hear their voices here too.”

In a news conference in Kabul on Tuesday, Mujahid was asked about freedom of speech. He accused Facebook of hypocrisy for promoting freedom of speech while censoring the group by removing the accounts of Taliban members.

“This question should be asked of those who claim to be promoters of freedom of speech who do not allow publication of foreign information,” Mujahid said.