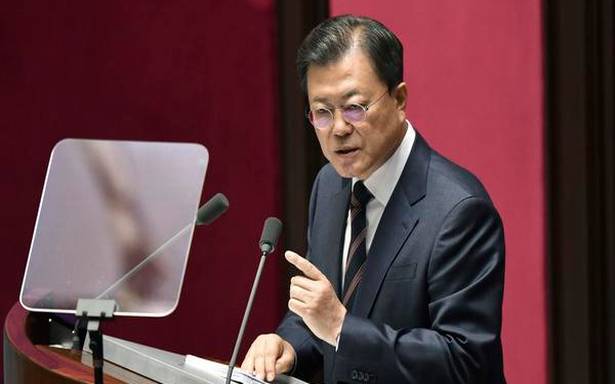 In his final policy speech at parliament, President Moon Jae-in said he’ll “make efforts to the end to help a new order for peace and prosperity on the Korean Peninsula.

South Korea’s president said Monday he’ll keep striving to promote peace with North Korea through dialogue until the end of his term next May, after Pyongyang raised animosities with a resumption of provocative weapons tests.

While launching a spate of newly developed weapons in recent weeks, North Korea has also slammed Washington and Seoul over what it calls hostility toward the North. Its actions indicate North Korea wants its rivals to ease economic sanctions against it and accept it as a legitimate nuclear state, experts say.

In his final policy speech at parliament, President Moon Jae-in said he’ll “make efforts to the end to help a new order for peace and prosperity on the Korean Peninsula be established through dialogue and diplomacy.”

Mr. Moon, a champion of greater reconciliation with North Korea, once shuttled between Pyongyang and Washington to help facilitate now-stalled nuclear diplomacy between the two countries. Pyongyang turned a cold shoulder on Mr. Moon after its diplomacy with Washington broke down in early 2019 amid bickering over the sanctions.

Mr. Moon praised himself for paving the way for a peace process on the Korean Peninsula by holding three summits with North Korean leader Kim Jong Un and helping arrange the first-ever North Korea-U.S. summit between Kim and then-President Donald Trump in 2018.

But Mr. Moon acknowledged his push for peace through dialogue remains “incomplete.”

Mr. Moon’s single five-year term ends next May, and he’s barred by law from seeking reelection. The presidential candidate of Mr. Moon’s ruling liberal party has unveiled a similar North Korea policy as Moon’s. Surveys indicate a neck-and-neck race with a potential conservative candidate, who will likely take a harder line on the North.

Mr. Moon’s appeasement policy on North Korea has been divisive, with his supporters call him a peace-making mediator while his opponents accused him of helping North Korea find ways to weaken international pressure and perfect its weapons systems.

The North Korean weapons systems tested recently are mostly short- and medium-range weapons that place South Korea and Japan within their striking ranges. Last Tuesday, North Korea fired a ballistic missile from a submarine in its most significant weapons test since President Joe Biden took office in January.

Some experts say North Korea may test a longer-range missile that could pose a direct threat to the American homeland to increase its pressure on Washington in coming weeks.

In part of his efforts to ease tensions, Mr. Moon has recently been pushing for a symbolic declaration to end the 1950-53 Korean War, which ended with an armistice, not a peace treaty. When Mr. Moon meets Pope Francis at the Vatican this week during his European tour, they’ll discuss a possible North Korea trip by the Pope who has repeatedly expressed hopes to visit the North, according toMr. Moon’s office.