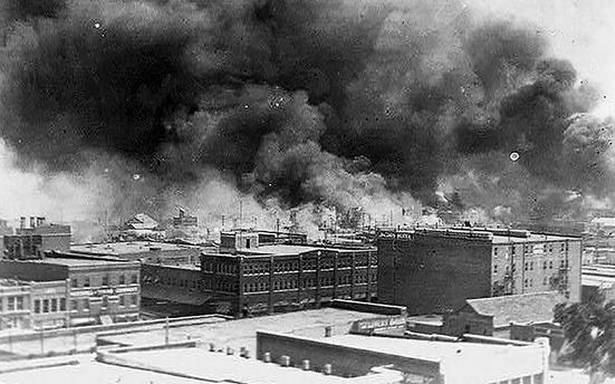 Hundreds were killed in Tulsa by racist mobs in 1921.

This week, U.S. President Joe Biden became the first sitting American head of state to officially recognise one of the worst incidents of violent racial hate in the country’s modern history — the Tulsa Race Massacre of May-June 1921.

The widespread killings in Tulsa, Oklahoma, targeting relatively well-to-do African Americans, and the extensive damage to their property by rampaging white mobs at the time shocked the nation and world. Over the decades since then, it has led to introspection and policy actions that have sought to bridge the racial chasm that continues to haunt American society.

In 1921, it was the affluent, predominantly African American neighbourhood of Greenwood, Tulsa, founded by descendants of slaves and having earned a reputation as the “Black Wall Street” of the U.S., that faced the carnage unleashed on May 31 and June 1.

Tulsa was especially known for being an unofficial sanctuary city for African Americans suffering the consequences of harsh segregation or Jim Crow laws in pre-civil rights America.

It appears that deep resentment that a community of colour, and one subject to centuries of oppression, had risen to the higher echelons of the economic pyramid blended with historical racist hatred, resulting in lethal violence culminating in the deaths of hundreds, bodily injury to thousands and millions of dollars of damage to the homes and neighbourhoods burned down by the rampaging mob.

What followed was in a sense even worse — survivors, gripped by fear of reprisals and unable to speak out about the violence they had faced, and losses suffered, had to contend with an elaborate attempt to cover up the massacre and protect the perpetrators.

For years, the massacre was barely mentioned in government circles, and in newspapers and textbooks. It was only in 2000 that it finally made an appearance in the Oklahoma public schools’ curriculum. Immediately after the massacre, the Tulsa police chief reportedly ordered officers to confiscate from photo studios all the pictures taken of the violence unfolding.

Further, according to historians who have studied the events surrounding the massacre closely, not only did Tulsa city officials cover up the crimes committed, they also “deliberately shifted the narrative of the massacre by calling it a ‘riot’ and blaming the Black community for what went down”.

While the Tulsa “Race Riot” Commission was formed to investigate the events in 1997 and officially released a report in 2001, it is clear that much has remained buried — quite literally.

It is this painfully sordid, and as yet unresolved history of racist hatred that has prompted Mr. Biden to say, “We do ourselves no favours by pretending none of this ever happened… We should know the good, the bad, everything. That’s what great nations do: They come to terms with their dark sides.”

Yet the greater challenge for Mr. Biden’s government is to go beyond the question of reparations to survivors and address the root causes of disparity that continue to plague American society.

In that regard African-American communities may welcome Mr. Biden’s plans to address racial discrimination in the housing market by issuing new rules on fair housing practices and curbing inequities in the home appraisal process; by directing more federal spending to small and minority-owned businesses; and to close the wealth gap between the African American community and others through new initiatives focused on economic opportunities for minorities.