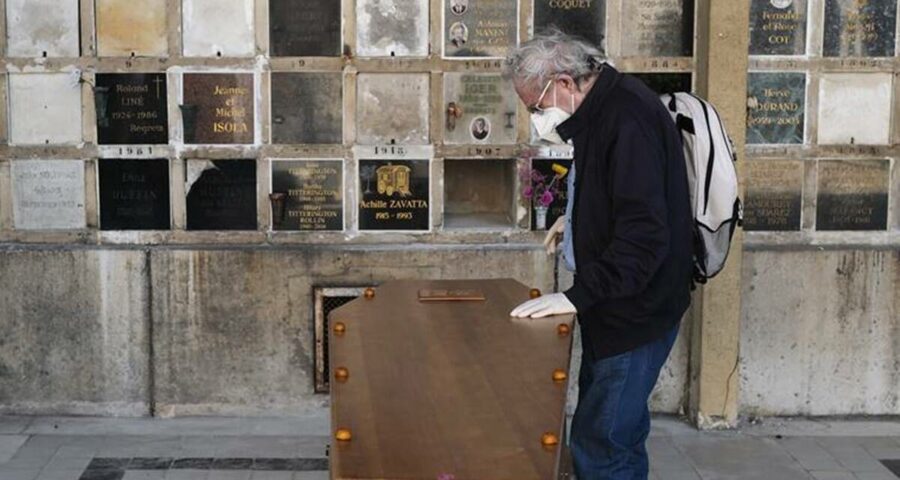 Unlike earlier periods when most Americans were seeing their lives affected by COVID, relatives of people dying of the virus now describe a lonely sorrow: They are mourning even as so many others are celebrating newfound freedom. After more than a year of pandemic restrictions, many Americans are leaving their masks behind, making summer travel plans and joyously reuniting with family and friends. As more are vaccinated and new infections plummet, there is a sense that the worst of the pandemic is over in the United States.

But for people like Michele Preissler, 60, the worst has just begun.

Preissler lost her husband to COVID-19 in late May, just as many restrictions were being lifted and life, for many, was starting to look more like normal. Customers were going without masks last week at the Walmart near her home in Pasadena, Maryland, where she was shopping for items for her husband’s funeral.

“Everybody is saying, ‘Oh, it’s fine,’” said Preissler, whose husband, Darryl Preissler, 63, loved to hunt, camp and go crabbing with his grandson, and was not vaccinated when he caught the virus at a wedding in early April. “I’m just thinking to myself, ‘If you only knew what I just went through.’”

With half of Americans protected with at least one dose of a vaccine, the virus outlook in this country is the best it has been at any point in the pandemic. New cases, hospitalizations and deaths are lower than they have been in many months, and even the most cautious health officials are celebrating the country’s progress. Fully vaccinated people, who are at low risk of catching and spreading the virus, have been told they can take off their masks and return to many regular activities, with the support of top scientists.

Even now, though, about 450 deaths are being reported each day, and that has left hundreds of families dealing with a new kind of pandemic grief.

Unlike earlier periods when most Americans were seeing their lives affected by COVID, relatives of people dying of the virus now describe a lonely sorrow: They are mourning even as so many others are celebrating newfound freedom. In one sign of the dissonance, the pandemic has improved enough that funerals — once forced to take place over Zoom — are mostly permitted to happen in person again, a bittersweet shift for those losing people now.

In some cases, the grief has been complicated by new — and thorny — questions about vaccination. People dying from COVID-19 today are largely unvaccinated, health experts say. There have been some reports of people dying after being vaccinated, but experts say those are rare exceptions.

Some people who died in recent weeks got sick before they were eligible for shots, raising questions about whether the United States’ vaccine rollout moved quickly enough to reach all Americans. The widespread availability of vaccines is still relatively recent — most states had opened vaccines to all adults by mid-April, with up to six weeks needed for full immunity — and it can take several weeks from the onset of symptoms for cases to turn fatal.

Others who have died lately were hesitant to get shots, their relatives said, underscoring the challenge that remains ahead for health authorities in their quest to convince Americans of the safety of vaccination. Still others, like Darryl Preissler, who was busy at his job remodeling homes, simply had not yet gotten around to getting his shot, according to his wife, who already had been vaccinated.

“It’s like being related to the soldier who gets shot before the armistice kicks in,” said Dr. Toni Miles, an epidemiologist at the University of Georgia who studies grief and bereavement. “Everybody else is insanely happy, as they should be, because the war has stopped, but you lost somebody during a period when nobody wants to grieve.”

The nation has not reached this level of deaths since early July, after the virus had diminished from the spring surge in places like New York and before a summer outbreak worsened. At the worst point, in January, more than 3,000 people were dying each day of the virus, a daily toll that has diminished by about 85%. Now, there is no one city or region driving COVID deaths. Small numbers of people are dying all over, from California to Florida.

Even in the worst spots — Michigan leads the country in recent deaths per capita — the situation is vastly improved. About 34 deaths are being reported in Michigan each day, down from more than 130 a day last spring.

In recent weeks, the people dying have been slightly younger, often in their 50s and 60s, a group that became eligible for vaccines later than the oldest Americans and has been slower to accept the vaccine. In May, there were more deaths reported among people ages 50 to 64 than in those 85 and older, according to data from the Centers for Disease Control and Prevention. In January, those numbers were reversed; people 85 and older had accounted for about double the number of deaths as the younger group.

Most of the people critically sickened from the virus now have not had vaccines.

“The majority that I’ve taken care of personally that became sick enough to be hospitalized, all of them were not vaccinated, either fully or at all,” said Dr. Mark Hamed, an emergency room physician in Sandusky, Michigan, and the medical director for eight rural counties in the state.

For families of those who are dying now, the entire issue of vaccination has created a new layer of discomfort — and a set of difficult questions that no one was asking in the early months of the crisis, before vaccines.

Hollie Rivers has been devastated in the weeks since her husband, Antwone, died in Michigan. He had helped raise their blended family of five children, Rivers said, and had worked his way up to manager level at his job at a vehicle logistics company. She said he became her life partner — the “Charlie,” as she called him, to her “Angel.” At his funeral in May, she helped carry the coffin.

“I wanted to hold him until the very end, until I couldn’t hold him any longer,” Rivers said.

But after Rivers, 28, gave an interview to a Detroit-area television station and disclosed that her husband had not been vaccinated, she said she faced critical comments online. She and her husband had been initially hesitant, she said, but were considering getting the vaccine. Then Antwone Rivers, 40, got sick in early April, his wife said, before Michigan opened up vaccination to people his age.

Hollie Rivers described some online comments, including on a family GoFundMe page, as plainly hostile: “He refused the shot, how could you dare ask for money?” she recalled the tone of one message suggesting.

“Now I just feel like I want to cancel it. It’s not about money,” said Rivers, who is on short-term leave from her job installing car door panels. “I would live in a cardboard box if it meant my husband coming back to me and his kids.”

Miles, the epidemiologist who studies grief, said she had seen such dynamics play out in deaths from diseases like lung cancer or diabetes.

“We are shaming the dead, just like we always have,” she said.

Camille Wortman, a grief expert and professor emeritus at Stony Brook University in New York, said that survivors who lose a loved one to COVID-19 at this point in the pandemic might be more likely to experience feelings of anger, guilt and regret.

“The impact of the vaccine is really huge, and the grief of survivors will be more intense,” she said.

For Yvonne Santos, 30, of Houston, questions about whether her husband’s death could have been prevented find her in quiet moments — when she is looking at photos of the two of them together, or when she feels the weight of her in-laws’ grief. Santos said she had been worried about the safety and efficacy of the vaccines, because of how rapidly they had been created and produced. Her husband, Angel, also delayed getting a shot.

“I don’t talk about it with anybody else, but I do feel bad, because he didn’t really question it as much as I did,” Santos said. “I was the one who was still afraid.”

Santos said she and her husband both came down with the virus. After testing positive in early April, Angel Santos, a juvenile supervision officer, spent weeks in the hospital, where, she said, he expressed regret that he did not get the vaccine. He died May 19, at the age of 35.

“Then at least we knew we did everything we could,” she said.

Deaths from the coronavirus typically happen several weeks after initial infections, experts say. As cases plunge nationally, deaths have also fallen and may continue decreasing in the weeks to come.

On the day that the CDC announced that vaccinated Americans no longer needed to wear masks in most situations indoors — a move that was greeted by many as a sign of the end to the pandemic — Kole Riley, 33, was at his mother’s bedside at a hospital near Sedona, Arizona, saying a final goodbye.

His mother, Peggy Riley, 60, had taken a turn for the worse after falling sick with the coronavirus weeks earlier. She had not gotten vaccinated because she believed she had antibodies, her family said. Several members of their family, including Riley’s husband, had shown signs or been diagnosed with COVID-19 late last year.

After holding her hand in her final moments, her son emerged from the hospital to find far fewer people wearing masks and a country that seemed to have moved on. He was still thinking about his mother, a real estate agent who jogged in her free time and wowed family and friends with her homemade ribs and potato salad.

“Angry is the best and most polite way I could say it,” said Kole Riley, after seeing maskless shoppers in a convenience store.

He struggled to reconcile his grief with the country’s optimism.

“I didn’t think I would be dealing with this,” he said, “when all the arrows are pointing back to normal.”