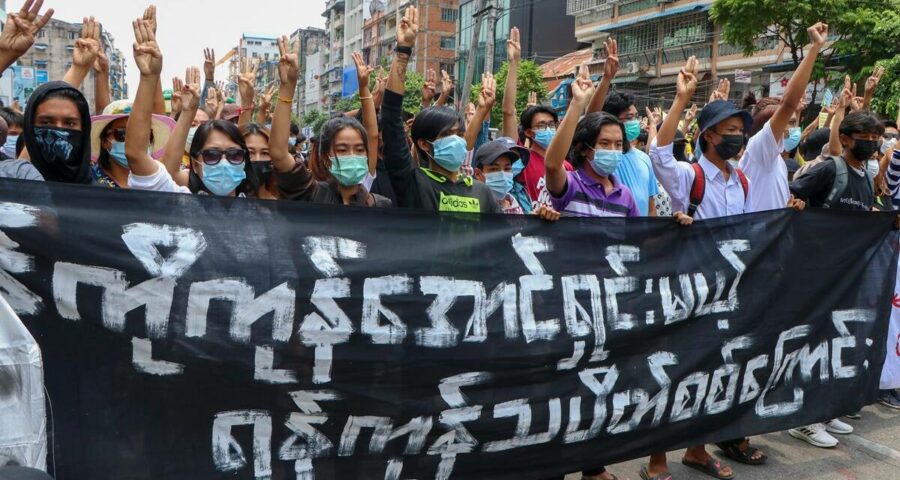 The Burmese military regime has routinely arrested journalists and banned independent media. But reporters continue to work underground — under pressure from the ruling junta, but also from the opposition. Myanmar’s military government, which overthrew the elected government on February 1, continues to violently crack down on protesters and the opposition movement. At the same time, it has also been trying to gain control over information.

Step by step, authorities have restricted access to social media and the internet. On February 4, Facebook, Facebook Messenger and WhatsApp were blocked, followed the day after by Twitter and Instagram. Blocking Facebook was a crucial move: about half of the country’s residents used the social media giant as their main news source.

The military has also imposed nationwide internet blockades since February 15, which have regularly lasted from 1 am to 9 am. Mobile internet has been shut down since March 15, with only broadband connections providing access to the internet. For a few days now, the nightly shutdown has no longer applied to these connections. But the move worked: large parts of the population now receive their news almost exclusively from sources permitted by the military.

In addition to cutting off online communication, the state television station MRTV has been brought into line. The broadcaster now regularly shows photos of activists and demonstrators, naming them as alleged enemies of the state. Military broadcaster Myawaddy TV recently announced that for the first time in 30 years, 19 people had been sentenced to death for killing a soldier. And the state-owned newspaper The Global New Light of Myanmar has reported in detail the military’s legal and moral obligations for ousting the elected government.

Meanwhile, independent or private media outlets such as Mizzima, Democratic Voice of Burma, Khit Thit Media, Myanmar Now, 7Day News and others have been banned. Most have retreated to parts of the country controlled by ethnic minorities and their troops, such as Karen state on the border with Thailand. From there, they continue to publish their views against the military government.

Journalists are in hiding

According to Human Rights Watch, some 48 journalists are currently in detention; 23 others were detained but have since been released. Most have been accused of violating a new section of the penal code which criminalizes the dissemination of “statements, rumors or reports” that can lead to fear among the population and may incite people to “attack the state and public order” or to lead to “attacks between different classes and communities.”

DW spoke with several journalists, who cannot be named for security reasons. They have not slept in their homes for weeks, and fear being arrested during nightly searches by the military — as was the case with Kaung Myat Hlaing of the Democratic Voice of Burma. The journalist from the southern coastal town of Myeik livestreamed police shooting near his apartment as they detained him in a crackdown on March 1. He remains in custody.

“I’m doing well, so far,” one journalist told DW, who has moved from place to place living with other reporters. “But the nights have their terrors.” As soon as the barking of stray dogs or the banging of pots by neighbors announce that the military is moving into the neighborhood, they instantly turn off their computers and lights in the hope staying hidden.

“We talk a lot about work. It’s easier to bear the situation in a group,” one said. “But many journalist friends have left the military-controlled areas and taken off to support the underground or exile media.”

But it’s not just the military putting pressure on the media. Most local media reporting from the underground cannot afford to take a neutral position on the situation without incurring the wrath of the protesters. For example: Instead of using the military government’s self-imposed name, “State Administrative Council,” they write “State Terrorist Council.” People are not “arrested” by the security forces, but “kidnapped.”

“It’s no longer possible to write a report or analysis without making a clear commitment to the revolution or the military,” one journalist told DW. The problem, he said, is that now many journalists no longer write what is happening, but what people want to hear.

Basically, he said, almost all local media outlets have an agenda: instead of journalism, it’s about activism. “I have decided to stop writing anything for the time being, because every statement is misinterpreted,” he said.

One university official told DW that he hoped the situation would soon stabilize, and that banks would reopen and it would finally be possible to go back to work. Even if that stabilization meant stopping the protests against the military.