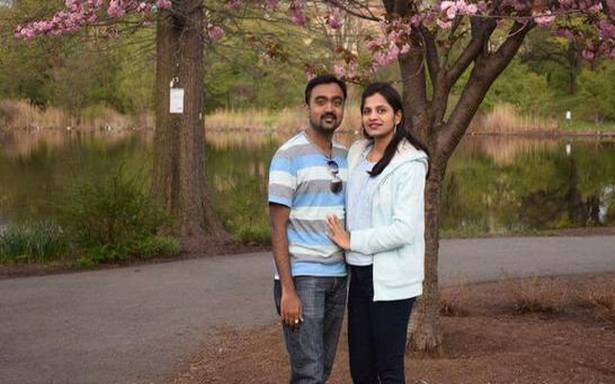 Some local U.S. newspapers quoted a press release from the county prosecutor’s office which said officers forced their way inside the apartment and found the couple dead.

An Indian couple was found dead at their home in the U.S. after neighbours saw their four-year-old daughter crying alone in the balcony of their house, family sources said on Friday.

Some U.S. media outlets said the couple died of an apparent stabbing in their North Arlington apartment.

The husband apparently stabbed and sliced his wife in the abdomen as she unsuccessfully tried to fight him off in their living room, a U.S. media report said.

The bodies of Balaji Bharat Rudrawar (32) and his wife Arati Balaji Rudrawar (30) were found at their 21 Garden Terrace apartment in the Riverview Gardens complex of North Arlington borough in New Jersey which has just over 15,000 residents.

“The bodies were found on Wednesday after neighbours saw my granddaughter crying in the balcony and informed the local police who then entered the house,” Balaji’s father Bharat Rudrawar told PTI.

Some local U.S. newspapers quoted a press release from the county prosecutor’s office which said officers forced their way inside the apartment and found the couple dead.

“Investigators were waiting for the medical examiner to determine the cause and circumstances of the death, but confirmed both victims had been stabbed,” the report said.

“The local police there informed me of the tragedy on Thursday. There is no clarity yet on the cause of the death. The U.S. police said they will share findings of the autopsy report,” Mr. Rudrawar said.

“My daughter-in-law was seven months pregnant,” he said. “We had been to their house and were planning another trip to the U.S. to be with them again,” he said.

“I am not aware of any possible motive. They were a happy family and had lovely neighbours,” he said when asked if he suspected foul play.

“I was informed by the U.S. authorities that it will take at least 8 to 10 days for the bodies to reach India after necessary formalities,” he said.

“My granddaughter is now with a friend of my son. He had several friends in the local Indian community, which has a 60% population in New Jersey,” he said.

Balaji Rudrawar, an IT professional from Ambajogai in Maharashtra’s Beed district had moved with his wife to the U.S. in August 2015 after they got married in December 2014, said his father, a businessman from the temple town, around 500 km from Mumbai.

While Balaji was working there for a prominent Indian infotech company, his wife was a homemaker, Mr. Rudrawar said.