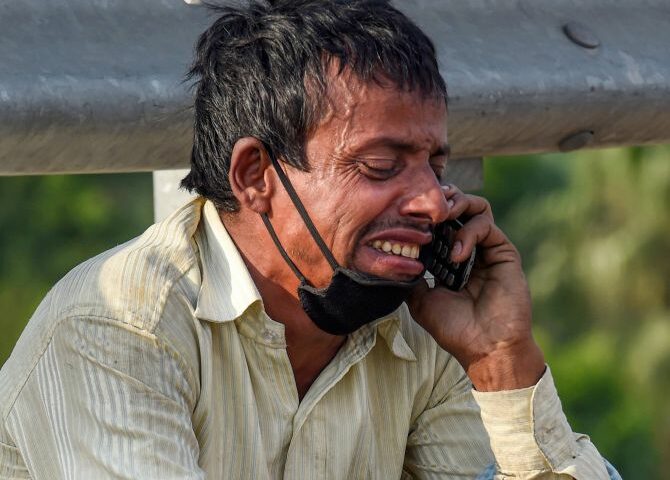 It took a lockdown for us in India to even recognise that the plight of migrants needs to be addressed.
They were faceless and unrecognised.
They were unappreciated and even hounded.
They were poorly paid and exploited, notes Ramesh Menon.

As India is caught in a paroxysm that is a deadly mix of the COVID-19 virus and the electoral frenzy, the pandemic races through the country’s urban and rural landscape.

But it does not stop fanatics from stomping all the pandemic norms and regulations.

In this madness, we are forgetting what over 400 million migrants are going through.

Their life continues to be a question mark with thousands losing jobs every day.

They are being undercut by a cruel marketplace that is making capital over their misery.

Daily wages have plummeted and so have opportunities.

It was this silent multitude that kept India’s wheels moving before the lockdown.

With no signs of normalcy returning soon, their plight is even more precarious.

They do not have bargaining power anymore. They helpless look at the reality of being left to the mercy of those who employ them.

Even regular white-collar workers face jobs and salary cuts and to expect migrant labourers to get a just and dignified deal is purely utopian.

Many have already left cities like Lucknow fearing that there would be more lockdowns as cases surge.

It is the fear and the trauma of last year that haunt them and trigger knee-jerk reactions.

Many remembered how they had trudged hundreds of kilometers on foot or paid all they had to ruthless transporters who saw this as a golden opportunity to make a fast buck and go laughing to the bank.

Many lived on glucose biscuits to stave off starvation. 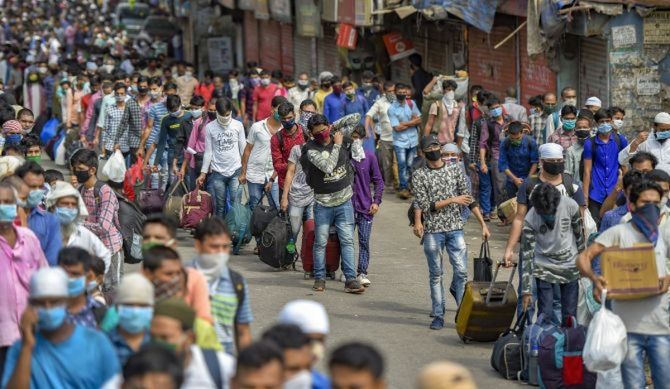 Some were resting on train tracks thinking that trains would not run due to the lockdown and were run over.

It was a humungous tragedy that punctuated their lives as they struggled to survive.

Yet, the focus of the nation and its lawmakers today is on the state assembly elections as if that is going to determine the future of India and mend the fractured economy.

Or give jobs to millions of educated unemployed.

There is a serious lack of data on migrant workers and therein lies a humungous problem.

How can a sustainable social security net be sculpted without data?

Little can be done to help them or draw a strategy or even make long-term policy changes.

Data is crucial to draw an effective game plan. So, it continues to be a fragile situation even after one year.

No lessons have been learned.

It did not surprise anyone when India’s labour minister Santosh Gangwar admitted in Parliament that the government had no data on how many workers had died and what was the size of the exodus from urban to rural India during the lockdown.

Gaps in such data would even render a government that wants to help, impotent.

Even the state governments do not have an idea of migration flows or even inter-state migration.

Professor Priya Deshingkar of the University of Sussex says that the migrants in India are marginalised, invisible, poorly understood, and not organised.

As most of them do not have documents, it makes it even worse.

Out of the two million migrants in Surat, only 7,000 were found to have been registered, she said. 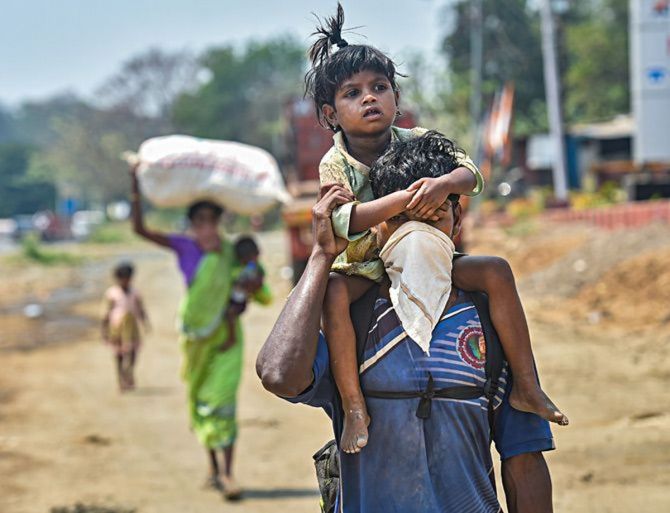 What has gripped the Centre and the state is the politics of it all and how the migrant workers can be wooed to vote them into power.

How many migrants know that Article 19(1)(e) of the Constitution, guarantees all Indian citizens the right to reside and settle in any part of the territory of India, subject to reasonable restrictions in the interest of the general public or protection of any scheduled tribe?

Migrants all the time battle with the reality of not having any kind of social security and health benefits.

They find they cannot access the Public Distribution System.

Ditto for other amenities in urban areas. While the idea of One Nation, One Ration Card floated by Prime Minister Narendra Modi sounds like a great idea, it has not worked and continues to be just another promise!

They do not see the minimum wages act being implemented in most states.

Kerala is the only state where migrants find they are paid more than the minimum wages that are stipulated.

A Draft Policy of Migrants by Niti Ayog has attempted to draw out a national policy with some interventions.

Naushad Forbes, President of CII says that it does not really reflect the situation of migrants.

How many migrants know that they can be protected under the Inter-State Migrant Workmen Act, 1979?

Under this act, labour contractors recruiting migrants must be licensed and must register migrant workers with government agencies.

They are also legally obliged to provide the migrant worker information about legal protections they have and the wages they are supposed to get.

Ten years ago, a report (external link) by the Standing Committee on Labour pointed out that the implementation of protections outlined in the Inter-State Migrant Worker Act was poor and registrations of workers under it were low.

No prizes for guessing if anything has really changed for the Indian migrant in the last ten years. 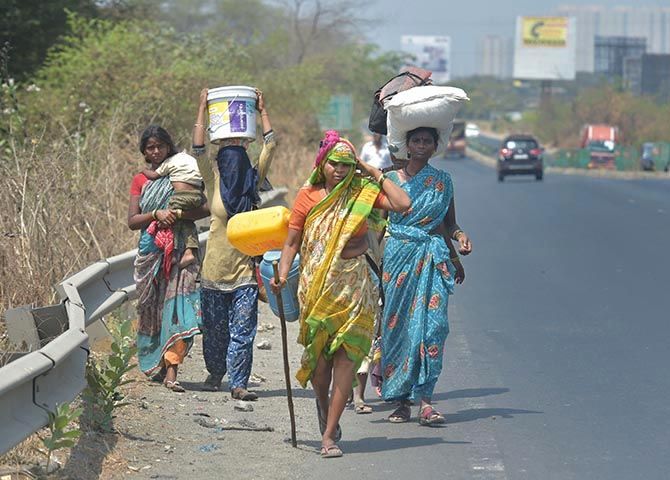 Professor Chinmay Tumbe of the Indian Institute of Management-Ahmedabad, points out that while we have a policy infrastructure in place to deal with international migrants, it has none for the locals who move from state to state in search of work and livelihood.

States like West Bengal, Uttar Pradesh, Jharkhand, Bihar, and Madhya Pradesh must have a body that exclusively caters to migrants, he said.

India has not ratified the International Labour Organisation Convention on Migrants.

In March 2015, then labour minister Bandaru Dattatreya told Parliament that India did not do it as it was not in tune with Indian laws.

In the current situation, have we learned any lessons with the massive migration that we noticed of millions of workers who trudged home during the pandemic?

Naushad Forbes, President of the CII points out that even if we assume that ten million were a part of the reverse migration that happened last year when the lockdown was announced and if we assumed they earned just Rs.

Forbes says that we need to seriously consider if we could do three basic interventions for the migrants:

Haryana and Jharkhand now are moving towards creating laws that ensure that a large chunk of its local population has jobs reserved for them.

What then happens to migrants? Where will they go? No one is asking employers if they even want to employ the locals.

Most of them would not be wanting to do the kind of work that migrants would do.

Secondly, migrants do not get into trade unions and so employers prefer to employ them for hassle-free production of goods whereas locals would get unionised and call the shots.

Many argue that migration should be seen as beneficial and not as a problem.

Here is a situation where everyone gains as people move from one area where there are no jobs to one where there are jobs and an economy that needs their expertise or skills.

Recently, the government has sanctioned two surveys to figure out the migrant population and the issues that need attention.

It is a step in the right direction, at last.

It will survey over 3,00,000 households to figure out the conditions of migrants and sources of livelihood.

The second survey will collect data from 1,50,000 companies on the kind of jobs they have to offer.

If this is a genuine exercise, it will throw up useful data to help policymakers build an architecture for the welfare and protection of migrants and throw up new hope.

Of late, data has been suspect in India as it is dressed up to suit political exigencies.

Data from uncomfortable areas like unemployment are not being collected anymore.

It took a lockdown for us in India to even recognise that the plight of migrants needs to be addressed. Satyajeet Rajan, additional chief secretary, labour and skills, Kerala, says that a lot of migrants will change only when they have voting rights in the state they work in as only then will they have a voice.

Kerala, he said, is working towards integrating the migrant workers who he refers to as “guest workers”, into the cultural milieu of the state so that they feel comfortable with the food, language, and systems like education for their children.

Maybe, India needs to take a leaf out of Kerala’s book.

It has 21,000 camps set up during the lockdown for migrant workers and not one of them starved.

Ramesh Menon is an author, journalist, editor of The Leaflet, film-maker and corporate trainer.